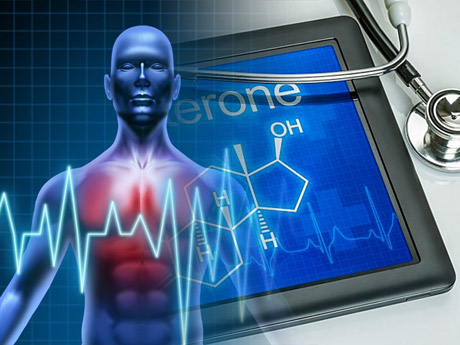 Accumulating evidence shows beneficial effect of testosterone therapy on a wide range of health outcomes, including inflammation, insulin sensitivity, muscle mass, body fat mass, lipid profiles,  endothelial, bone mineral density, energy and vitality, mood, sexual function and overall quality of life. [1-9]
Despite this, concerns have been raised that testosterone therapy could have detrimental effects on cardiovascular disease.
In this article I summarize results from a comprehensive systematic review and meta-analysis, the largest to date, of all placebo-controlled randomized clinical trials (RCTs) on the effect of testosterone therapy on cardiovascular-related outcomes.[10]

* This new systematic review and meta-analysis of randomized controlled trials reporting the effects of testosterone therapy on different cardiovascular outcomes, included 75 RCTs with a total of 3016 patients on testosterone therapy and 2448 patients on placebo, for mean duration of 34 weeks.[10]
* The principal outcome of this analysis was the effect of testosterone therapy, as compared with placebo, on the incidence of a new major adverse cardiovascular event (MACE). MACE was defined as the composite of cardiovascular death, non-fatal acute myocardial infarction and stroke, and acute coronary syndromes and/or heart failure reported as serious adverse events. This was done to comply with requirements for drug safety assessment, as required by regulatory agencies.
* The meta-analysis took into consideration baseline hypogonadism status (total testosterone levels below or over 346 ng/dL or 12 nmol/L), trial duration (≤ 12 weeks and > 12 weeks), clinical conditions (elderly men, men with cardiovascular disease, frail men and men with metabolic diseases) and industry-funding vs. non-industry-funding.
* The mean age, baseline testosterone level and body mass index (BMI) of enrolled patients were 60 years, 11.2 nmol/L (323 ng/dL) and 28 kg/m2 (overweight).
* Testosterone was administered in different doses, preparations (oral, intramuscular and transdermal) and in mixed populations of hypogonadal and eugonadal (non-hypogonadal) men.
* This analysis, performed on the largest number of studies collected so far, indicate that testosterone therapy is not related to any increase in cardiovascular risk, even when composite or single adverse events were considered.
* Present data clearly refute the notion that testosterone therapy would increase risk of cardiovascular events.
* In studies performed in subjects with metabolic derangements, a protective effect of testosterone therapy on cardiovascular risk was observed.
* No sponsorship bias was detected, because no difference in MACE risk was found when the analysis was performed according to the presence or absence of drug company support.
* Testosterone therapy in hypogonadal men can be a valuable strategy to improve metabolic profile, reduce body fat and increase lean muscle mass, which would ultimately reduce the risk of heart disease.

The notion that testosterone is "bad for the heart" arose from the well documented simple observation that heart diseases are more prevalent in men than in women.[11-18] Acute coronary heart disease and ischaemic stroke events appears approximately 10 years earlier in men than in women, and these rates remain higher in men than in women in all age groups.[11] More men are living with and dying of coronary heart disease than women, and have more hospital discharges for cardiovascular diseases and.[19] The prevalence of coronary heart disease is higher in men within each age stratum, which contributed to the perception that heart disease is a “man’s disease”.[19] A recent analysis found that the age-standardized risk of death from cardiovascular diseases is 80% higher for men (442/100 000) than for women (246/100 000).[12] Because men have higher testosterone, it was automatically assumed that testosterone may be the culprit. Further support for this notion comes from case reports of sudden cardiovascular death amongst male athletes abusing anabolic steroids (which are synthetic compounds similar to testosterone) [20-24], and observations that testosterone dose-dependently increases hematocrit [25, 26] and reduces HDL-cholesterol at supra-physiological levels.[27-29]
However, longitudinal observational studies demonstrate that it is reduced, rather than increased testosterone levels, which are associated with elevated risk of cardiovascular disease, cardiovascular mortality and all-cause mortality.[30, 31] This can be explained by the well documented strong associations of hypogonadism with a number of cardiovascular risk factors, including adiposity and increased waist circumference, insulin resistance and type 2 diabetes mellitus, hypertension and inflammation.[32-37]
In line with this, androgen deprivation therapy for prostate cancer causes worsening of these risk factors and co-morbidities [38], and a growing body of research demonstrates that testosterone therapy improves them.[1-9, 39] This indicates that hypogonadism is causally related to disease development and progression.

What this meta-analysis adds