It is well established menopausal HRT with estrogen alone or estrogen combined with progesterone or progestin significantly relieves symptoms of menopause and prevents osteoporosis.[1-4] However, in 2002, the principal results of the Women’s Health Initiative (WHI) trial were published in the prestigious Journal of the American Medical Association.[5]

From 1993 through 1998 about 16,608 healthy postmenopausal women aged 50 to 79 years had been enrolled in a study with the aim to specifically investigate health effects of menopause HRT (Hormone Replacement Therapy).[5]
All women enrolled had an intact uterus and received either the most commonly prescribed
HRT in the United States at the time - 0.625 mg/day of CEE (conjugated equine estrogen) plus 2.5 mg/day of medroxy-progesterone acetate (MPA) (sold under the brand name Prempro® or Premphase®) - or placebo.[5]

Note: As described elsewhere What are Bioidentical Hormones CEE and MPA are non-bioidentical hormones.

These are the type of hormones that were used in the well-known WHI studies.

The planned duration of the study was 8.5 years, however it was stopped early after 5.2 years because the incidence of invasive breast cancer exceeded the acceptable rate and the global index statistic showed that risks were exceeding benefits. More specifically, the results showed the following in the CCE + MPA group:

- 29% increased risk of myocardial infarction or death from cardiovascular disease

- 200% increased risk of venous thrombotic disease/embolism, deep vein thrombosis, and pulmonary embolism (blockage of an artery in the lungs by fat, air, a blood clot, or tumor cells).

The conclusions drawn from this study was that administration of 0.625 mg/day of CEE and 2.5 mg/day of MPA is not appropriate for the primary prevention of cardiovascular disease in menopausal women, and furthermore increases risk of invasive breast cancer, cerebrovascular accident, venous thromboembolism, deep vein thrombosis, and pulmonary embolism.

Additionally, in a secondary study, the results of which were published in 2003, the Women’s Health Initiative Memory Study (WHIMS) revealed that women aged 65 years or older who received the same combination of 0.625 mg/day of CEE and 2.5 mg/day of MPA had double the risk of dementia compared with women not taking these hormones.[6]
A WHI follow up study published in 2005 reported that while estrogen plus progestin HRT relieves some menopausal symptoms, such as vasomotor symptoms and vaginal or genital dryness, it also comes with side effects, such as bleeding, breast tenderness, and an increased likelihood of gynecologic surgery.[3] Increased breast tenderness during use of CEE + MPA has been associated with increased subsequent breast cancer risk.[7] This supports the earlier 2002 milestone report of an increased incidence of breast cancer.[5] All these findings support the conclusion that the risks of non-bioidentical estrogen and non-bioidentical progesterone outweigh the benefits.
Currently, all classes of estrogens and progestogens (progesterones and progestin) that are being sold in the United States, and are formulated for HRT as opposed to contraception, carry a black box warning on the package insert to notify consumers of the risks of these products, as discovered during the WHI trial.

What about estrogen only HRT

Because progestin markedly increases the risk of breast cancer relative to estrogen use alone [8], a WHI follow up study investigated menopause therapy with estrogen only.[9] Enrolled were 10,739 postmenopausal women, aged 50-79 years, with prior hysterectomy (surgery that removes the uterus). The intervention was non-bioidentical estrogen (conjugated equine estrogen [CEE]) 0.625 mg/day or placebo. After 6.8 years, this study was also terminated early because of unacceptable risk-to-benefit ratio. The alarming results were:[9]

- 39% increased risk of stroke
- 34% increased risk of pulmonary embolism (blockage of an artery in the lungs by fat, air, a blood clot, or tumor cells)
The conclusion from this study was that non-bioidentical estrogen should not be recommended for chronic disease prevention in postmenopausal women.[9]

Aftermath of the WHI studies

Widespread media coverage of results of the WHI studies led to a marked decline in sales and use of postmenopausal hormones.[10] One year following the publication of WHI results, prescriptions for Prempro® (horse urine-derived estrogens and a synthetic progestin, both non-bioidentical hormones) fell by 66% and those for Premarin® (horse urine-derived estrogens, non-bioidentical) fell by 33%.[11]

Understandingly, today many women refuse non-bioidentical HRT and seek out alternative therapies for treatment of their menopausal symptoms. [11, 15]

Studies show that bioidentical estrogen and biodentical progesterone is one solution to achieve this. We will cover this in upcoming articles.

The other less well acknowledged, albeit effective, solution is testosterone therapy for menopausal women, which we have covered in a previous articles:

Testosterone in women - is it physiological and clinically important? 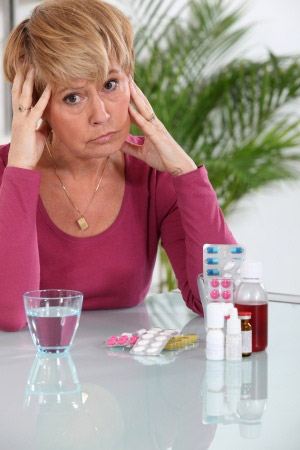