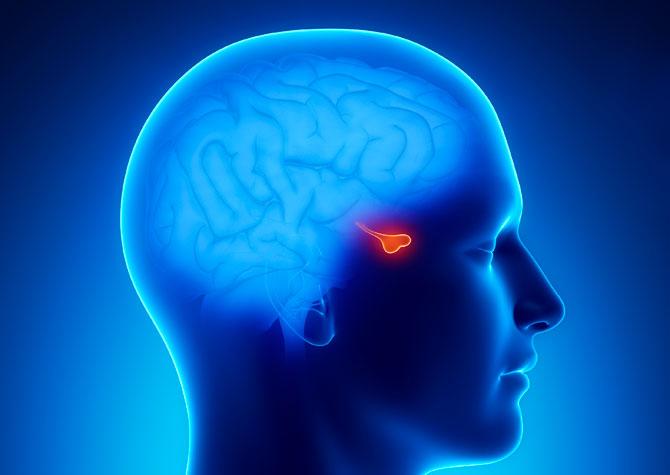 Growth hormone (GH) has been generating heated discussion in media and the lay press, especially in the context of aging. This has been fuelled in part by the well-documented decline in GH output with aging. Daily production of GH starts to decrease from the third decade of life by almost 14% for each passing decade, such that in a 70 year old man, on average GH secretion has declined by more than 70%.[1-6]
These discussions mostly revolve around the potential risks and benefits of GH deficiency and treatment. But how is GH deficiency really diagnosed? Are there different types of GH deficiency?
In this article we present the basics about adult GH deficiency, prevalence, causes and diagnosis. In future articles we will discuss more controversial topics related to GH, aging and potential health effects in different populations, as well as the effects of testosterone and estrogen therapy on the GH/IGF-1 axis.

What are the symptoms of GH deficiency in adults?

The term “adult GH deficiency” refers to classical GH deficiency, which in most cases is caused by damage to the pituitary gland or hypothalamus. Such damage can arise by head trauma, pituitary or brain tumors, or by treatment of brain tumors with surgery and/or radiotherapy.
Another cause of adult onset GH deficiency is idiopathic, meaning that it arises spontaneously or that the cause is unknown.
This is in contrast to “partial GH deficiency” or “GH insufficiency” which is most frequently caused by aging and obesity. Because several of the signs of aging, such as decreased muscle and bone mass, dyslipidemia, and psychological symptoms, are similar to what is seen in adults with GH deficiency, it has been suggested that these signs of aging may be due, at least in part, to the low levels of GH and IGF-1. This is a controversial topic that we will cover in more depth in an upcoming article.
Note that while metabolic and health related effects of GH treatment are being evaluated in clinical research studies in different populations, for clinical practice FDA has only approved GH treatment for classical GH deficiency (child-onset and adult-onset).[9]

How common is adult GH deficiency? 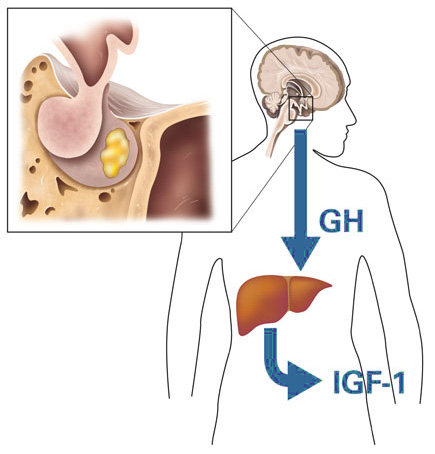 GH acts both directly through its own receptor and indirectly by inducing production of another hormone, insulin-like growth factor 1 (IGF-1), which mediates many of the biological actions of GH.[12-14] IGF1 is synthesized both in the liver and other tissues, but circulating IGF-1 in the blood comes primarily from the liver under stimulation of GH.[13]
Because GH is secreted from the pituitary in pulsatile burst, a single blood draw cannot be used to measure average daily GH production. As IGF-1 levels are more stable, intuitively one may think that IGF-1 levels are a good indicator of GH status. However, this is not the case.
A normal level of IGF-1 does not exclude presence of GH deficiency in adults [15]; studies show that 37 to 70% of GH deficient adults have normal IGF-1 levels.[16, 17] An explanation for this discordance is that the regulation of IGF1 production in the liver is not solely dependent on GH status. Other factors known to influence IGF1 status include age, nutrition, sex, estrogen therapy and prolactin.[15, 18] Regarding the impact of age, one study found that 70% of GH deficient adults under the age of 40 years had an IGF-1 level below the age-related normal range, but the corresponding percentage for those over the age of 40 was only 35%.[19]
Therefore, the measurement of serum IGF-1 concentrations is not suitable as a single diagnostic test for growth hormone deficiency in adults. [7, 8, 20, 21] However, a very low IGF-1 level is suggestive of GH deficiency [22] and should be followed up with provocative testing (see below).
While recognizing these limitations, it is generally accepted that in well-nourished patients without liver disease, low IGF-1 levels in the presence of 3 or more pituitary hormone deficiencies (LH, FSH, FSH, ACTH and/or prolactin) provides very strong evidence of GH deficiency. Further testing in this context is optional and not necessary to make the diagnosis.[7, 8, 19, 20]
However, for most adults with suspected GH deficiency, a provocative test of growth hormone reserve is required for a proper diagnosis of GH deficiency.

In contrast to childhood-onset GH deficiency, where growth failure / short stature is a useful marker of GH deficiency, the symptoms of GH deficiency in adults are general and common (including fatigue, poor exercise capacity, weakness, abdominal obesity, and impaired psychosocial function).
This, coupled with the discordance between IGF-1 levels and GH status, explains why proper diagnosis of adult onset GH deficiency requires biochemical confirmation with provocative GH capacity testing in most cases.
Before any testing of GH secretion is performed, patients should be assessed for other deficient pituitary hormones and adequately replaced.[19]
Insulin Tolerance Test (ITT)
The insulin tolerance test is consider the “gold standard” by all major medical endocrine societies.[7, 8, 23] This test measures GH reserve by inducing low blood glucose (aka hypoglycemia, a potent stimulus of GH) with a bolus of intravenous insulin (0.15 units/kg). GH levels are measured every 15-30 minutes for two hours. Following an adequate venous blood glucose nadir of 2.2 mmol/L, a peak GH response of less than 5 ng/mL indicates GH deficiency, while a peak of less than 3 ng/mL indicates severe GH deficiency.[7, 8, 22]
The insulin tolerance test requires constant monitoring for the duration of the test, and is resource intensive. It is also contraindicated in people with ischemic heart disease or epilepsy.[7, 8, 24]
GHRH + Arginine Test
Until 2008, the GHRH + arginine test was the best alternative to the insulin tolerance test.[7, 8] However, in 2008 the manufacture of recombinant GHRH (Geref®) in the United States was discontinued.
The unavailability of recombinant GHRH in the US created a need for another reliable alternative to the insulin tolerance test, particularly for practicing endocrinologists who are not equipped with the facilities, resources, and personnel to conduct the insulin tolerance test, and in patients where the ITT is contraindicated.
Glucagon Test
Clinical practice guidelines in the US state that the glucagon test is a reliable, safe and less resource intensive alternative to the insulin tolerance test in the diagnosis of GH deficiency.[7, 8]
Glucagon (1–1.5 mg) is administered intramuscularly and blood samples are taken for GH at baseline, and at 30-minute intervals for up to 240 min (4 hours).[25, 26] Validation studies show that the glucagon test is at least equal to the insulin tolerance test in assessing the GH reserve in hypopituitary adults and provides a clear separation between GH-deficient and non-deficient adults.[25, 26]
The cut-off for peak GH level with the glucagon test is of 3 ng/dL (3 microg/L).[25, 26] Peak GH levels tend to occur between 120 to 180 min. In adults with GH deficiency, peak GH levels fail to rise above 3 ng/mL.
Glucagon is readily accessible, since it is widely available for treating hypoglycemia in patients with diabetes. The glucagon test is a simple (albeit 4-hour long) test that is easy to perform. It is generally well tolerated, but 10 to 34% of patients may experience nausea.[27, 28]
The mechanism of glucagon stimulated GH release is not fully understood, although it has been suggested that glucagon works by stimulating noradrenaline release, which in turn may stimulate GH secretion via the α-receptor; this suggestion is supported by the finding that the administration of β-blocker enhances glucagon-stimulated GH release.[29] Although the glucagon affects blood glucose, which usually rises to peak around 90 min and then gradually declines, the blood glucose response is not used to interpret the test.
Arginine Test
The arginine test, using a peak GH cut-off of 0.4 μg/L may be an alternative when the insulin tolerance test is contraindicated or when glucagon is not available.[7, 22] However, it is not as reliable, as there are fewer data about the accuracy of the arginine test in distinguishing between GH deficient versus non-deficient adults.
Arginine (an amino-acid) is a weaker stimulant for GH secretion than the tests mentioned above, and there is a considerable overlap in GH response to arginine between GH deficient patients and normal controls; one study found that up to 59% of healthy subjects had a peak GH response to arginine less than 3ng/mL and 68% had values less than 5 ng/mL.[22]
Reported side effects are rare and include paraesthesia (a sensation of tingling, tickling, pricking or “pins and needles”) and dry mouth. Nevertheless, when compared with other GH stimulation tests, the arginine test was ranked the most popular with patients.[22]
Other tests
Other pharmacologic agents such as levodopa and clonidine are not adequate tests for GH deficiency and are not recommended for the diagnosis of adult GH deficiency.[7, 8, 29]
Several synthetic GH secretagogues that mimic the gastric peptide ghrelin are currently in development and may become available for use in the diagnosis of GHD in the future.[30]

Who should be tested?

If your IGF-1 level is very low (in the absence of liver disease) it should be followed up with further examination.
If you have had an accident with head trauma, have or have had a pituitary tumor, coupled with some of the symptoms described above, this is a reason to undergo a provocative GH test.
If you have 2 deficiencies in other pituitary hormones (LH, FSH, ACTH and/or prolactin), this is also a good indication for hypopituitarism.
In the presence of 3 or more pituitary hormone deficiencies, no testing is required to establish the diagnosis of GH deficiency.[8, 20]
Even if you are not a candidate for growth hormone therapy, you might have other hormonal deficiencies and/or disturbances. At Ageless Forever we take a holistic approach that looks at the whole person and all your hormones, and we specialize getting all your labs into their respective optimal health promoting ranges.

At Ageless Forever, Dr. Pierce uses the gold standard insulin tolerance test for GH evaluation and diagnosis. Ageless Forever is one of the few clinics that has the necessary resources and staff required to perform this test.
Dr. Pierce does not prescribe GH under no circumstances without proper diagnosis based on clinical presentation and GH provocative testing, due to the fact that GH is highly regulated by the federal government. For more info on off-label prescribing and the regulation surrounding GH, see our other article “Off-label Prescribing in Medicine – GH Notable Exception!”
For additional questions and/or to schedule an appointment with Dr. Pierce, please call our patient care coordinators at 702-838-1994
The table below shows FDA approved GH products and their respective indications.
Table: Recombinant Human Growth Hormone Products and FDA Indications.[9]

4.            Iranmanesh, A., G. Lizarralde, and J.D. Veldhuis, Age and relative adiposity are specific negative determinants of the frequency and amplitude of growth hormone (GH) secretory bursts and the half-life of endogenous GH in healthy men. J Clin Endocrinol Metab, 1991. 73(5): p. 1081-8.

23.          Ho, K.K. and G.H.D.C.W. Participants, Consensus guidelines for the diagnosis and treatment of adults with GH deficiency II: a statement of the GH Research Society in association with the European Society for Pediatric Endocrinology, Lawson Wilkins Society, European Society of Endocrinology, Japan Endocrine Society, and Endocrine Society of Australia. Eur J Endocrinol, 2007. 157(6): p. 695-700. 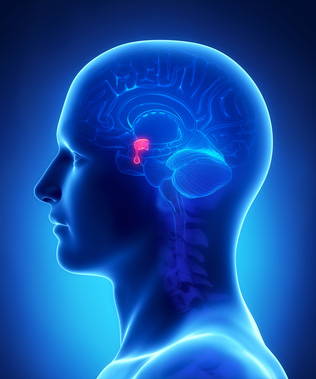