Metformin: is it an anti-aging pill? 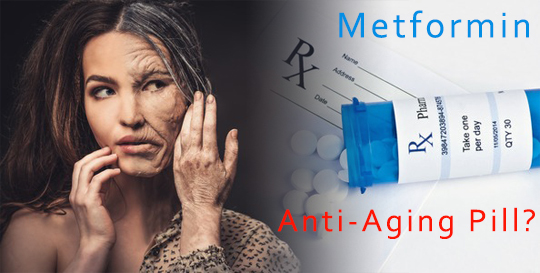 The science of aging is moving forward as scientists are elucidating the biology of aging. The ultimate goal is to develop treatments that delay aging, and in so doing, delay the development of aging-related diseases.[1]
Aging is the greatest risk factor for the majority of chronic diseases that are driving morbidity and health costs [2], but the aging process can be delayed with lifestyle (exercise and nutrition), genetics, and pharmacologic approaches.[3-8]
The so called “geroscience hypothesis” (“gero” is short for gerontology, which is the scientific study of the process of aging and its consequences)  holds that treatments that are targeting fundamental processes of aging may delay, prevent, alleviate, or reverse a wide range of diseases and conditions for which age is the primary non-modifiable risk factor.[1] Interventions that target fundamental aging processes have the potential to transform human health and health care.[9]
Excitement is now high because time has come for the first study to test the effect of metformin on aging-related outcomes in humans and see if it qualifies as an "anti-aging pill"...

As is always the case, sensational headlines are far from the true data, such as “First Anti-Aging Drug Could Help People Live To 120”. Nevertheless, what gave rise to this media attention was FDA’s approval of the first human study to see if metformin can protect against multiple diseases of aging.
The TAME study, which is planned to start in 2016, will enroll 3,000 subjects, ages 65–79, in 14 centers across the U.S. Rather than study the effects of metformin on each separate aging-related disease, the primary outcomes will measure time to a new occurrence of a composite measure that includes cardiovascular events, cancer, cognitive decline, and mortality. The TIME study is not pharma sponsored; it is initially funded by the American Federation for Aging Research (AFAR), a nonprofit organization.
The TIME study will be conducted by scientists who are studying biological aging and use metformin as a tool in their research on human aging, which may lead to discovery of even better drugs to prevent aging-related diseases in the future.
More credible presentations have been given by Dr. Nir Barzilai - Professor in the Albert Einstein College of Medicine, Department of Medicine and Director of the Institute for Aging Research – and Dr. Steven Austad - scientific director of the American Federation for Aging Research:
“Could one pill help you live longer?” by Steven Austad, PhD | CNN Opinion | 12.13.15
Interview with Dr. Nir Barzilai | BBC World News | 12.01.15
“The man who wants to beat back aging” | Science magazine | 09.16.15

A drug indication “to prevent age-related diseases” is currently not recognized as an acceptable end points for drug registration by regulatory agencies such as the FDA.
Age-related diseases are defined as conditions in which age is a leading risk factor and the dysfunction of an organ system occurs in the absence of a single inciting event.[1] Age-related diseases include cardiovascular disease, type II diabetes, osteoarthritis, osteoporosis, cancer, Alzheimer’s disease and other dementias.[1]
If successful, TAME will mark a paradigm shift in medicine, moving from treating each medical condition in isolation to targeting aging per se and all its related major diseases. The FDA approval to conduct the TAME study means that the FDA is willing to consider aging a modifiable condition and an official indication for which treatments can be developed and approved. This will lead to increased funding and research, and expanded and better drug development to target aging related biological processes, as opposed to isolated diseases. TAME can open the door to more widespread research and other drug developments that will help us all live healthier, longer.[1]

Metformin – what is it?

Metformin is the first-line treatment for type 2 diabetes, and is the most widely prescribed anti-diabetic drug in the world.[10, 11] Metformin is derived from the plant Galega officinalis (French lilac), which has a history as a herbal remedy that can be traced back to medieval Europe when it was used to relieve symptoms now attributed to diabetes.[12]
Metformin has a long track record of safety and efficacy; it  has been used in Europe for treatment of elevated blood glucose levels (hyperglycemia) since 1957, and in the USA since FDA approval in 1994. Thus, metformin is not a new magic drug at all. It is just now getting attention for its widespread beneficial effects beyond blood glucose control. I will cover these effects in an upcoming article.

The MILES “Metformin in Longevity” study

Dr. Barzilai research team at the Institute for Aging Research at Albert Einstein College of Medicine has already conducted a smaller study on metformin, the MILES study.[13] In the MILES study, half of the subjects (age 60 and older) were given 1,700 mg metformin/day, and the other half placebo.
This study examined the effect of metformin treatment on the biology of aging in humans. Specifically, they investigated whether metformin treatment will restore the gene expression profile of older adults with elevated blood sugar levels, aka impaired glucose tolerance (IGT), to that of young healthy subjects. They also measured the effect on insulin sensitivity and insulin secretion. This latter outcome is interesting as it has been demonstrated that centenarians (people who are 100 years old or older) compared with “younger aged” subjects have a preserved glucose tolerance and insulin action.[14]
The MILES study have been completed but data haven’t been published yet. I will report on it as soon as it gets out. The scientists at the Institute for Aging Research believe that if metformin changes the biology of aging in tissues to a younger profile, it supports the notion that this drug may have more widespread use… as an "anti-aging" drug. Stay tuned….

The goal of slowing aging has only recently gained credibility in the scientific community. This is because of an exploitative anti-aging industry that offers products or services marketed with unfounded claims to slow, stop, or reverse the aging process. While scientists have successfully delayed aging in mammals by using various substances, as of this writing, no supplement or concoction has been scientifically shown to delay aging in humans. The only thing studies have shown in humans is that people who engage in regular exercise [4, 8, 15, 16] and master athletes [17-21] live longer healthier lives than couch potatoes.
There is now near consensus among aging scientists that it is possible to prolong human healthspan.[1, 9] Aging is a primary risk factor for not only diabetes but also our biggest killers, heart disease, cancer and Alzheimer's.[22] The TAME study will test if metformin can delay development of age-related diseases – and by implication, slow down the biological aging process that increases vulnerability to these age-related diseases. If successful, the TAME study will result in a paradigm shift in medicine, moving from treating each medical condition in isolation to targeting aging per se and all its related major diseases. The good news is that metformin is a very cheap generic medication. Publix pharmacy in Florida is already giving out metformin for free to patients who have a script for it. It is likely that the government may make it available to everybody if research shows that it can prevent development of our largest killers. In addition to improve the health of Americans, that would save a tremendous amount in health care costs.
While existing data shows promise for metformin to qualify as a drug that help prevent age-related diseases – i.e. as an “anti-aging” drug - it should be underscored that it cannot make up for an unhealthy lifestyle. You still need to exercise regularly and eat healthy if you want to live a long vital life. Metformin or any other future “anti-aging pill” will never ever be able replace the myriad of benefits that you get from regular exercise and healthy nutrition.