Effects of testosterone treatment on body fat, lean mass, symptoms and leptin resistance in obese men on a calorie-restricted diet

Here I present a series of three reports from a study that specifically investigated if testosterone therapy has beneficial effects on body composition, symptomatic response, adipokines (hormones secreted by fat cells, such as leptin and adiponectin) and gut hormones, over and above caloric restriction alone.[4-6]

-    Compared to diet alone, combining diet + testosterone therapy results in a greater reduction in fat mass (-2.9 kg) and visceral fat, and a reduced loss of lean mass after 1 year.

Effectiveness of obesity treatments is commonly evaluated based on degree of weight loss.[7-10] However, it is excess body fat that causes most obesity-associated health risks and is associated with increased mortality, independent of body mass index (BMI).[11] Caloric restriction is a foundation in obesity treatment interventions.[8-10] However, the drawbacks with caloric restriction are that adherence to a reduced calorie diet is low, and a large part of the weight loss is composed of lean mass.[12] The loss of lean mass is a major drawback, as a reduced lean mass is an important risk factor for disability, morbidity and mortality.[13] Chronic diseases related to poor lifestyle behaviors account for more than two-thirds of deaths [14], and detrimental alterations in muscle metabolism and loss of lean (muscle) mass play an important role in these disease outcomes.[15] Sub-optimal lean mass can also  occur in younger people and has detrimental health consequences regardless of age.[16] 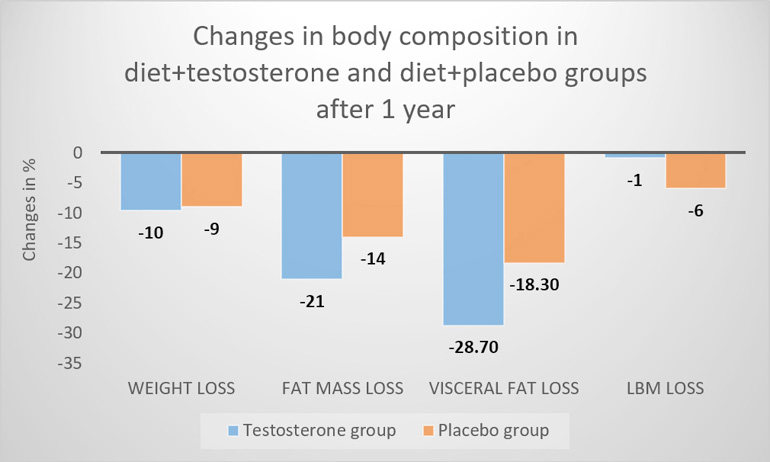 At baseline, all men reported a moderate degree of symptoms, assessed by the Aging Male Symptoms (AMS) scale, and the international index of erectile function (IIEF-5) questionnaire. It was found that 56 weeks of testosterone treatment improved symptoms of androgen deficiency over and above the effects of weight loss alone.[5]

Compared with placebo, erectile function in men assigned to testosterone was improved in those with baseline erectile dysfunction (baseline IIEF-5 score ⩽20).

Effect on adipokines and gut hormones

Addition of testosterone treatment led to reductions in circulating leptin levels beyond what was achieved by caloric restriction alone.[6] The higher the baseline adiposity, the greater the leptin lowering effect of testosterone compared to placebo treatment. Changes in levels of adiponectin and gut hormones were similar between testosterone and placebo treated men during the study. In both groups, weight loss associated changes in these hormones were evident after the 10 week diet phase, and these changes persisted at week 56 despite 46 weeks of weight maintenance.[6]

Low testosterone levels may contribute to leptin resistance in obese men.[20] Notably, this study suggests that the testosterone effect on reducing circulating leptin – i.e. increasing leptin sensitivity - is not simply an indirect effect mediated by testosterone-associated reductions in body fat.[6] It can be speculated that testosterone treatment may restore HPT axis responsiveness to leptin, which may in turn promote further reduction in fat mass.

While calorie restriction is the first-line treatment of obesity, its benefits are limited by loss of lean body mass.[12] As lean body mass is associated with a greatly reduced mortality risk, independently of fat mass and cardiovascular and metabolic risk factors [22-25], treatment modalities that preserve lean mass during dieting are needed. As the study presented here shows, testosterone therapy fills this need.[4]

One reason for the lack of preservation of lean mass during the actual diet may be the short diet duration of 10 weeks, as testosterone-induced changes in lean mass typically take several months.[26] Because gains in skeletal muscle mass (lean mass) are correlated with testosterone dose and achieved testosterone levels [27-29], one can also raise the question if it would be possible to entirely prevent the loss of lean mass by achievement of a higher physiological testosterone level? The increase in testosterone levels from a mean baseline level of 8.2 nmol/L (237 ng/dL) to 15.6 nmol/L (450 ng/dL) at study end (week 56) may possibly have been too small to prevent loss of lean mass during the initial calorie restricted diet. Nevertheless, the finding that testosterone therapy attenuates the reduction in lean mass after a diet + maintenance phase should be highlighted, as other treatments that cause large reductions in body weight, such as bariatric surgery [30, 31], also cause large reductions in lean body mass.[32]

It should also be pointed out that the differences in body composition (greater reduction on body fat and preservation of lean mass) occurred despite the modest increase in endogenous total and free testosterone levels (2.9 nmol/L [84 ng/dL] and 30.3 pmol/L [10.5 pg/mL] respectively) with 10.8 % weight loss in placebo-treated men.[4] This diet-induced elevation in testosterone levels is similar to what has been seen in previous weight loss studies [33, 34], and suggests that the endogenous rise in testosterone subsequent to dieting is not sufficient to prevent diet-related loss of lean mass.

The subjects in this study were advised to perform at least 30-minutes of moderate-intensity exercise every day. It is interesting that only men receiving testosterone maintained increased activity levels at study end after 1 year.[4] Previous studies have shown that testosterone therapy consistently improves mood and feelings of energy, and reduces fatigue [35-40]; this in turn may bolster motivation and the ability to adhere to diet and exercise programs.[21, 41, 42]

In summary, this new line of research shows that giving testosterone therapy to obese men who are on a diet confers greater improvements in body composition (larger fat loss and reduced loss of lean mass) and symptomatic response than diet alone. These new data also show that diet + testosterone therapy in addition reduces leptin resistance. These data call for consideration of testosterone therapy as an adjunct to available obesity treatments to increase their efficacy and long-term outcomes.