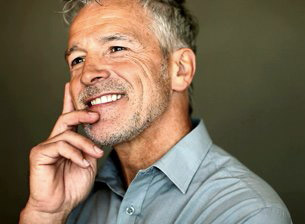 Five days after the FDA approval a notable and impressive 6-year long TRT study was published, confirming the health benefits of TRT that have previously been found in shorter term studies... [44]

The term “diabesity” was coined in the early 1970s to describe the occurrence of obesity and diabetes in the same individual.[17] Excessive amounts of body fat, especially abdominal (visceral) fat accumulation, is a well documented strong risk factor for insulin resistance and development of type-2 diabetes and cardiovascular disease.[18-26]

More and more studies are showing that testosterone deficiency contributes to development of obesity (both general and abdominal), insulin resistance, metabolic syndrome, type-2 diabetes and muscle loss. [27-32] In line with this, a growing number of intervention studies have demonstrated that TRT improves these outcomes.[2, 3][4, 28, 33-43]

The longest study reported to date was conducted by a research group in Germany led by Dr Farid Saad, one of the most prominent worldwide leaders in the field of TRT research. This study was published March 11th, 2014 in the International Journal of Endocrinology.[44]

All men received treatment with testosterone undecanoate 1000 mg (Nebido, Bayer Pharma, Berlin, Germany), administered at baseline and at 6 weeks, and thereafter every 12 weeks for up to 72 months.

Waist circumference (WC) was measured midpoint between the iliac crest (top of the hip bone) and the lowest rib.

Total testosterone levels showed a significant rise from 257 ng/dL (8.9 nmol/L) at the beginning of therapy to above 461 ng/dL (16 nmol/L) within the first year of therapy, and this physiological level remained constant throughout the course of treatment.

A marked and significant decrease in percentage body weight was noted over the course of testosterone therapy. Over the entire 6-year observation period, patients lost 15% of their initial body weight (Figure 3). After one year, patients had lost 3.1% of their initial weight, after two years, 6.8%, after three years, 9.6%, after four years, 11.8%, after five years, 13.6%, and after 6 years, 15%. These successive yearly changes were statistically significant compared with baseline.

The mean changes in lipid profiles were gradual and progressive and were significant at each year when compared to baseline levels, reaching plateaus between three and four years. The ratio of total cholesterol to HDL cholesterol improved from 6 to 3. These changes reached a plateau after three years with further slight but not statistically significant decreases.

No adverse events were reported in patients treated with testosterone for up to 6 years.

The study authors concluded that long-term TRT for up to 6 years results in significant and sustained improvements in weight, type-2 diabetes, and other cardiometabolic risk factors in testosterone deficient obese, diabetic.[44] This study clearly demonstrates that TRT confers tremendous improvements in metabolic parameters and body composition, and may play an important role in the management/treatment of obesity and diabetes (diabesity) in men with testosterone deficiency.

Critics of TRT often state that there are no long term safety and efficacy studies on TRT. This 6-year long TRT study [44]and previous 5-years long studies [3, 4, 6, 7]blatantly refute those claims. Several of results from the above outlined 6-year long TRT study deserve special mention: [44]

First, this 6-year long study clearly demonstrates that TRT confers long term effects for the duration of treatment. Therefore, the response to a short term 3-month therapeutic trial of TRT, which has been suggested to be used as part of the diagnosis of hypogonadism [45], will not allow enough time for full expression of all the beneficial effects that have been documented in longer term TRT studies.[3-7, 44] For example, in the 6-year study outlined above, it took 1 year before significant and marked reductions were seen in waist circumference, weight, fasting glucose and HbA1c.[44]Further support for the importance of allowing enough treatment time comes from an analysis of the onset of effects of TRT and time span until maximum effects are achieved.[46]This analysis concluded that improvements in blood cholesterol/lipids and glycemic control may need up to 12 months for full expression.[46]Another important parameter when discussing TRT and time course of treatment is PSA (Prostate-Specific Antigen). PSA and prostate volume initially rises marginally, but it reaches a plateau at around 12 month (further increase should be related to aging rather than therapy).[46]This is a normal response and the initial PSA elevation should not be an indication to discontinue TRT too soon, if there are no contra-indications. Prostate growth is extremely sensitive to variations in androgen concentrations at very low concentrations, but becomes insensitive to changes in androgen concentrations at higher levels.[47]A short-term TRT treatment will not allow testosterone saturation of the prostate and PSA to the plateau.

Fifth, the percent reduction in lipid levels (total cholesterol, LDL, and triglycerides) was close to 30%, which is a value similar to that attained by use of statins in men with abnormal blood lipids (dyslipidaemia).[56]

Sixth, it is notable that men with both very low and borderline low total testosterone levels responded equally well to this 6-year long-term testosterone treatment.

Finally, this study clearly shows that different outcomes plateau at different time points. For ex. the significant improvements in blood cholesterol and triglycerides (lipids) reached a plateau after 3-4 years of TRT, while the decrease in HbA1c was progressive and statistically significant up to five years of testosterone treatment. Importantly and interestingly, the reductions in waist circumference and body weight (and percentage change in body weight) were statistically significant at the end of each year compared to the previous year over the first five years, and even at the end of the sixth year compared to fifth year. This is an unusual and remarkable finding, as obesity interventions (both drugs and lifestyle changes) commonly are most effective the first year, and thereafter progressively lose their efficacy.[57-59]As this 6-year long study demonstrates, testosterone treatment excels in this regard. Let's hope in the near future this information will reach doctors working with patients who are sedentary, obese and suffer from cardio-metabolic complications.

Did your doctor tell you that there isn't enough long-term safety and efficacy data to support the use of TRT? If so, do yourself a favor and get another doctor who is informed on the latest advances in testosterone research and men's health.