Can Age-Related Declines in Testosterone Levels be Prevented or Reversed? 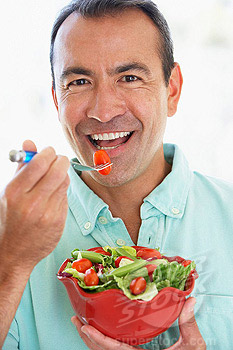 It is well-documented that testosterone levels decline with age in men.

In older men (over 60 years of age), the average rate of decrement in total testosterone levels has been found to be 110 ng/dL every decade.[3]

However, the relative contributions of changes in health and lifestyle to that decline have not been adequately evaluated. A notable study was set out to investigate this...

The objective of this study was to establish the relative importance of aging, health, and lifestyle in contributing to the testosterone decline in aging men.[4]

Another study confirmed these finding by showing that the effect of increasing body fat and waist size on lowering testosterone levels is more substantial, compared with that of age. [5] This later study also demonstrated that body fat / waist size is the most important determinant of the differences seen in total testosterone levels [5], regardless of age. [9]

Accumulating research data supports the major impact of body fat/waist size in determining testosterone levels. A systematic review and meta-analysis which found that weight loss reverts obesity-induced secondary hypogonadism.[10] However, the amount of weight loss required is large and very hard for most men to achieve and sustain. Nevertheless, healthy lifestyle habits should be given more attention as a strategy to prevent development of hypogonadism.

The sharper decline in testosterone levels in people with poor health, among whom obesity, metabolic syndrome, diabetes and cardiovascular disease is common, indicates that a substantial proportion of the apparent aging effect is attributable to changes in health status. Thus, the age-related testosterone decline can be partially prevented and/or slowed down by adherence to a healthy lifestyle incorporating a sound diet and regular exercise.