(702) 838-1994 (833) 4-AGELESS
We are Las Vegas' CoolSculpting Experts! Call us at 702-838-1994 for info.
Body fat removal procedures are becoming increasingly more popular. Although diet, exercise, and bariatric surgery may be effective in controlling obesity, cosmetic procedures may still be necessary to remove localized adiposity in difficult to lose locations, such as the love handles (aka flanks) and tummy (abdomen).

CoolSculpting (aka cryolipolysis) is an FDA approved non-invasive and well-tolerated treatment for selective removal of body fat with cooling. This technique is based on the concept that fat cells are more sensitive to cold than the surrounding tissue. Prolonged, controlled local skin cooling can induce selective damage and subsequent loss of subcutaneous fat, without damaging the overlying skin.[1]
Several studies demonstrate the safety and efficacy of the CoolSculpting procedure [2-7], also see our previous CoolSculpting article with research evidence. For example, in one clinical study, at 2 months 10 subjects had a 20.4% reduction in fat thickness as measured by ultrasound of the love handle and 25.5% reduction at 6 months after a single treatment.[5] Another study demonstrated an average loss of 14.67% in flat layer at 2 months post-treatment using caliper measurements.[6] A more recent and larger study demonstrated 25% reduction in fat layer thickness at 3 months based on caliper measurements.[7]
A new study was recently published which aimed to measure fat volume loss, using three-dimensional imaging technology, after CoolSculpting treatment,see figure 1.[8] In addition, this study also evaluated fat loss efficacy using caliper measurements and blinded investigator evaluations of clinical photographs. Subject satisfaction, tolerance, and safety were also assessed.
RESEARCH METHODS:
A prospective study of subjects treated with cryolipolysis on the flank (love handle) was performed at Massachusetts General Hospital. Volume measurements were performed with a Canfield Scientific Vectra three-dimensional camera and software to evaluate the amount of post procedure volume change. Clinical outcomes were assessed with caliper measurements, subject surveys, and blinded physician assessment of photographs.
RESULTS:
Eleven subjects were enrolled in this study. Each subject underwent a single cycle of CoolSculpting to one love handle (flank). The untreated love handle served as a control for comparison. The follow-up time after treatment was 2 months.
At the 2 months follow-up visit, the treated love handle demonstrated a fat volume loss of 39.6 cc compared to the untreated side. This fat volume loss was also seen in caliper measurements; from baseline to 2 months post-treatment caliper measurements demonstrated a significant fat reduction of the treated love handle from 45.6 mm at baseline to 38.6 mm. This corresponds to a 15% reduction in fat thickness in the treated love handle. The untreated love handle did not show any reduction in skin fold fat thickness, see figure 1. 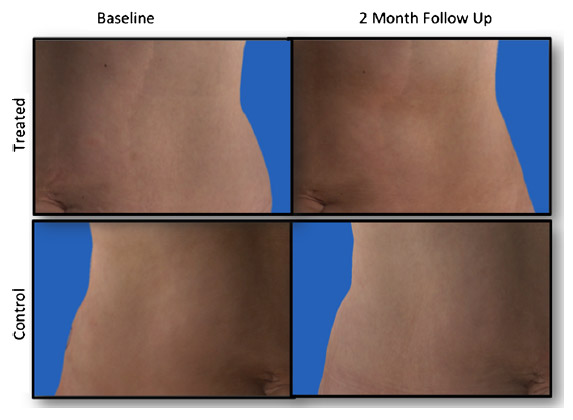 Figure 1: Flanks (love handles) at baseline and at 2 month follow-up after a single treatment showing subtle change in contouring. The left flank was treated and the right flank was a control (untreated).
Image from Garibyan, L., et al., Three-dimensional volumetric quantification of fat loss following cryolipolysis. Lasers Surg Med, 2014. 46(2): p. 75-80.
No unexpected side effects or adverse events were reported. Post-treatment satisfaction surveys demonstrated that the large majority (82%) of subjects were satisfied with the results.

CoolSculpting is a safe, well-tolerated, and effective non-invasive fat removal procedure. 2 months after just one CoolSculpting treatment, an average fat loss volume of about 40 cc was demonstrated in the treated love handle. This corresponds to a 15% reduction in fat thickness.
In terms of subject satisfaction, this study found that the large majority of the subjects were satisfied with the results, and that they would have the treatment again and be recommending it to a friend. The number one reason they liked the treatment was that it was noninvasive. This is in line with the trend that more patients are seeking minimally invasive techniques with very little down time, despite the fact that the volume loss is not as significant as invasive techniques, such as liposuction.
References: