The “good” HDL cholesterol under attack! - Defending Niacin, aka vitamin B3 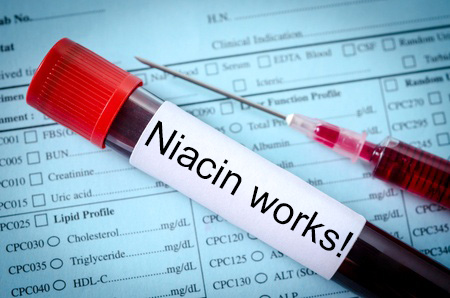 Niacin confers tremendous beneficial effects on both lipids, inflammation and endothelial function. For more, see my previous article:
Niacin – a.k.a vitamin B3 – the neglected broad spectrum cholesterol drug!
Despite this, two media attention grabbing studies - AIM-HIGH and HPS2-THRIVE - did not find any benefits of niacin supplementation in heart disease patients who were already on intensive statin treatment.
Here I will summarize these studies and expose their multiple flaws, which never made it to the headlines...

The AIM-HIGH study (Atherothrombosis Intervention in Metabolic Syndrome with Low HDL/High Triglycerides: Impact on Global Health Outcomes) was a randomized, multicenter, prospective, controlled clinical trial that was conducted at 92 centers in the United States and Canada, and was published in the New England Journal of Medicine in December 2011.[1]
AIM-HIGH attempted to answer the question whether once LDL cholesterol is reduced with statins, is there an incremental benefit from raising HDL (with niacin)?
A total of 3414 patients, 45 years of age or older, were randomly assigned to receive 1500–2000 mg extended-release niacin or placebo. Both groups received simvastatin adjusted to maintain LDL levels below 80 mg/dL. The primary end-point was the composite of death from coronary heart disease, non-fatal heart attack, ischemic stroke, hospitalization for an acute coronary syndrome, or symptom-driven coronary or cerebral revascularization.
The study was terminated early (after 3 years) due to lack of clinically meaningful efficacy; the statin-niacin group and statin-placebo groups had an equal number of deaths/hospitalizations.
However, the AIM-HIGH study had several flaws that precludes drawing any conclusions regarding the efficacy of niacin:
1. The elevation in HDL achieved in the niacin group was only 4 mg/dL higher than that in the placebo group (42 vs. 38 mg/dL).
2. The placebo given to the placebo group was not a “placebo”.  Every placebo tablet contained 50 mg immediate-release niacin, and subjects in the placebo group were given 2 to 3 tablets daily, amounting to 100 to 200 mg per day. Importantly, an even lower dose of niacin (50 mg twice daily) was previously reported to increase HDL by 6% in statin treated patients.[2] Thus, AIM-HIGH was actually a comparison between standard-dose (1500-2000 mg/d) and low-dose (100-150 mg/d) niacin, in heavily medicated patients. This likely contributed to the “paradoxical” HDL elevation that was seen in the placebo group.
3. Because niacin also modestly reduces LDL levels, a lipid-lowering algorithm was use to keep the LDL levels between the statin + placebo and statin + niacin groups the same. Therefore, the placebo group received significantly greater doses of simvastatin and ezetimibe than the niacin group, which further complicates interpretation of the results.
4. The early study termination of AIM-HIGH (shortened from planned 4.1 to 3 years) limits study
interpretation because it may have obscured an eventual benefit. In the landmark niacin trial - the Coronary Drug Project – it took 5 years of treatment and 15 years of total follow-up to achieve a significant reduction of heart attacks, strokes and mortality. [3, 4]
5. Nearly 20% of subjects had taken niacin before study entry, and the average dose and duration of that treatment and, more importantly, any effect of pre-study niacin on trial results is unknown. This is important because niacin appears to have a substantial carry-over effect.[4] In the milestone niacin study – the Coronary Drug Project - mortality was not significantly reduced until 5 years of treatment and 10 years of further follow-up after discontinuation of niacin treatment.[4] Thus, pre-study niacin use may have obscured on-study niacin effects, especially given the relatively short study period.
6. A post-hoc sub-analysis of subjects who had both low HDL and high triglycerides found a significant 26-36% reduction in cardiovascular risk.[5] This never made it to the headlines!

The HPS2-THRIVE study (Heart Protection Study 2 - Treatment of HDL to Reduce the Incidence of Vascular Events) included 25,673 subjects, aged 50-80 years, with prior cardiovascular disease, the metabolic syndrome and/or type 2 diabetes, and was published in the New England Journal of Medicine in July 2014.[6]
HPS2-THRIVE attempted to evaluate the efficacy and safety of adding a drug combination, extended-release niacin (2 g) and laropiprant (a prostaglandin D2 antagonist that reduces niacin flushing), to intensive statin treatment.
After 3.9 years, HPS2-THRIVE was stopped due to serious adverse events. The niacin-laropiprant group was more likely to suffer deterioration in diabetes control and had a greater incidence of new onset diabetes, compared to the placebo group. Also, there was a greater frequency of impaired muscle function (myopathy), infection, and bleeding in the niacin-laropiprant group. There was no significant difference in incidence of major cardiovascular events between statin treated patients assigned to niacin-laropiprant vs. those assigned to placebo.
However, like the previous AIM-HIGH study, HPS2-THRIVE unfairly blames niacin for being the bad guy:
1. The study was not designed to investigate the effect of either drug alone. Therefore, niacin cannot be blamed for the negative results.
2. All subjects in the study had excellent lipid levels before the start of the study. This means that HPS2-THRIVE was conducted in patients generally lacking any lipid-related indication for niacin treatment. The National Lipid Association (NLA) published a position paper stating that HPS2-THRIVE “tested a drug in patients who, on average, had no indication to take it.”[7] The NLA also states that niacin is still a valuable statin alternative in statin intolerant patients.
3. Another unfortunate design element was that niacin was always given with laropiprant, a prostaglandin blocker with unknown safety or cardiovascular effects. With regard to safety, the adverse events - impaired muscle function, infection and bleeding - have not been seen in any previous niacin-only studies conducted since the 1950s.[8-10] This suggests that they may have resulted from laropiprant, or from a drug interaction between laropiprant and statin. Indeed, studies show that laropiprant may have effects that counteract the beneficial effects of niacin.[11, 12] Also notable, in the AIM-HIGH – which used the same extended-release niacin but without laropiprant – there was no increase in diabetes incidence.
4. HPS2-THRIVE included subjects of different ethnicities, but reported composite data for all combined. Among the 57% of subjects who were from Europe there was a borderline significant 9% decrease in cardiovascular risk, whereas the 43% of subjects from China had a non-significant (meaning could have been caused by chance) 2% increase. Notably, it was the Chinese population who experienced most of the side effects.
5. Of clinical importance, there was a strong and statistically significant effect of baseline lipids; subjects with LDL levels greater than 58 mg/dL (most of them) at the start of the study had significantly fewer cardiovascular events.

Thus, to the contrary of widespread media misinformation, neither AIM-HIGH nor HPS2-THRIVE prove that niacin is ineffective or harmful.
Importantly, neither AIM-HIGH nor HPS2-THRIVE apply to people who are NOT taking statins, or those with higher LDL levels at baseline (over 85 mg/dL), high triglyceride levels (over 150-200 mg/dL and low HDL (below 40 mg/dL)
The International Society of Integrative, Functional and Metabolic Cardiovascular Medicine (ISIFMC) refuted the HPS2-Thrive study [12], and The National Lipid Association [13]both concluded that AIM-HIGH and HPS2-THRIVE do not negate the possibility that there may be significant beneficial effects with greater elevation in HDL level.
On the basis of an enormous amount of basic scientific and clinical investigation, the National Lipid Association also highlights the need for continued research on the therapeutic effect of modulating HDL levels, structure and function.[13] As outlined in my previous articles, niacin is a perfect candidate.
What’s important to keep in mind regarding HDL boosting medication studies is that many times the problem is not the target – in this case HDL – but the drug. A prime example is the drug torcetrapib, which despite resulting in an impressive increase of 72% in HDL and a decrease of 25% in LDL caused a 25% increase in heart disease event and a 58% increase in all-cause mortality.[14] This was explained by off-target side effects.[14, 15]
Niacin is – a.k.a vitamin B3 – is an essential vitamin, not a man-made drug that is foreign to the body. The safety and efficacy of niacin has been well-documented, as I’ve outlined in previous articles:
Niacin – a.k.a vitamin B3 – the neglected broad spectrum cholesterol drug!
Niacin, aka vitamin B3 – what you need to know about potential side effects

Therefore, niacin deserves to be defended. It is an innocent natural vitamin which doesn’t possess the big pharma capital and lobbying power. What strikes me is that all modern large statin trials do not include a non-statin comparison group. All they do is add on other drugs and/or niacin (as in the case of the AIM-HIGH and HPS2-THRIVE studies) to a statin-based treatment. Why? Because these studies are extremely resource intensive and very expensive to conduct, that only big pharma has the capital to sponsor. Having a non-statin comparison they would run the risk of it showing to be better than the statin treatment. FDA, the U.S. National Institutes of Health (NIH) and the Institutional Review Boards are definitely are missing in action!
Another reason why most traditional old-school doctors don’t like niacin is because they don’t care to take the time to explain to their patients how to use niacin to beat the flush. I covered this in detail in a previous article:
Niacin - How to Beat the Flush
Thus, there is no problem with niacin. The problems are the flawed studies, misleading media headlines and ignorant doctors! This is why you need to be proactive and take charge of your own health by learning from non-biased medical information resources, and not blindly trust your narrow minded doctor. As medical writer I have the “luxury” to peruse the studies and look at the raw data. I am doing my very best to make it available to the general population – as well as to the minority of good doctors who actually care about providing their patients the best possible care, like Dr. Pierce at Ageless Forever - in a way that can be comprehended and acted upon in real life clinical practice.