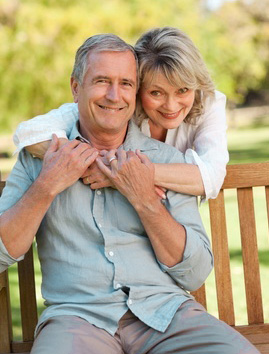 Population studies show that men with low or low-normal testosterone levels are at an increased risk of mortality compared to those with higher levels, and that cardiovascular disease accounts for the greater proportion of deaths in men with low testosterone.[1]
Here I summarize a medical review paper which addressed the following two questions: [1]
1.  Is testosterone deficiency directly involved in the pathogenesis of these conditions or is it merely a biomarker of ill health and the severity of underlying disease processes?
2.  Does testosterone replacement therapy retard disease progression and ultimately enhance the clinical prognosis and survival?

It has previously been established that low testosterone is an independent risk factor for future development of obesity, the metabolic syndrome and type 2 diabetes. [2] These medical conditions are all major risk factors for cardiovascular disease, which is the leading cause of death worldwide.[3] Cardiovascular disease alone claims more lives each year than any other major cause of death.[3]
Testosterone deficiency is associated with notable cardiovascular risk factors, including insulin resistance, abdominal obesity, dyslipidemia, endothelial dysfunction, hypertension, inflammation.[2, 4, 5] I covered this in more detail in a previous article “Testosterone Levels, Testosterone Therapy and Cardiovascular Risk in Men”.
In line with this, a growing number of intervention studies confirms that testosterone therapy beneficially impacts multiple risk factors; it significantly reduces body weight and waist circumference [6-10], fasting glucose [8, 11], HbA1c [7, 8], the total cholesterol / HDL ratio [8, 12], triglycerides.[10] A placebo-controlled trial showed that testosterone treated men after 12 months had markedly improved insulin resistance (HOMA-IR), C-reactive protein (CRP, a major inflammatory marker), and notably carotid intima media thickness (CIMT, a surrogate for atherosclerosis), compared with placebo.[11]
In contrast, two retrospective studies alleged that testosterone therapy may be harmful.[13, 14] The first of these studies compared the incidence of cardiovascular events (myocardial infarction, stroke and mortality) between subjects who received testosterone therapy and those who did not.[13] This was a heavily flawed study for several reasons. Also, raw data showed less events of each endpoint in the testosterone-treated group, but questionable statistical analysis using greater than 50 variables then suggested the opposite result.[13]
The second study, which collected data retrospectively from a health-care database following 55,593 prescriptions for testosterone, reported an increased risk of non-fatal myocardial infarction in the 3 months after the prescriptions were issued compared to the prior 12 months in these patients.[14] There are several weaknesses in this study; no data on whether or not hypogonadism had been diagnosed or even if testosterone levels were measured, no evidence on compliance or monitoring of testosterone levels on treatment, hematocrit or PSA etc. Also, there were no data on fatal myocardial infarction; it could be argued that testosterone may have reduced the severity of events from fatal to non-fatal myocardial infarcts. Both of these studies have been heavily criticized by distinguished testosterone academicians and clinicians [15-17] and a retraction has even been requested due to misconduct and misleading information.[18]

A recent medical review sought to synthesize available evidence in order to shed light on two important questions:
• Is testosterone deficiency directly involved in the pathogenesis of these conditions or is it merely a biomarker of general poor health and the severity of underlying disease process?
It is well-documented that testosterone deficiency is a reflection of ill general health. Lower testosterone levels in men are associated with a poor quality of life, mood changes (including lack of motivation, difficulties with concentration and depression), fatigue, sexual dysfunction, reduced libido/sexual activity, loss of muscle mass and physical strength, frailty, impairment of the immune system, insulin resistance, obesity (both general and abdominal), metabolic syndrome, diabetes, atherosclerosis,  vascular disease, cardiovascular events and mortality.[19, 20]
Mechanistic studies indicate that testosterone deficiency possibly may be directly involved in the pathogenesis of metabolic diseases, and possibly accelerate development and/or progression of atherosclerosis.[21-23] A few intervention studies support a possible causality of testosterone and atherogenesis.[11, 24, 25] Ultrasound measurement of CIMT, a surrogate measure of the presence of atherosclerosis, strongly predicts future clinical cardiovascular events.[26-28]
One small study found that testosterone therapy for 12 months resulted in a greater reduction in CIMT in testosterone treated men than placebo [25]. This was confirmed in a more recent larger study.[11] In the latter study, CIMT values were similar at baseline in the testosterone treatment and placebo groups, while after 12 months, a significant reduction of CIMT was detected in the testosterone treated men that was maintained after 24 months of treatment.[11] The treatment induced increase in testosterone levels was correlated with the magnitude of reduction in CIMT.[11] Most cross-sectional studies also show significant associations of testosterone deficiency and severity of CIMT [29-34], and in older men (over 70 years) low free testosterone levels predict progression of CIMT over 4 years of follow-up, independently of cardiovascular risk factors.[35]
As mentioned above, a growing number of studies show that testosterone deficiency has an adverse effect on salient cardiovascular risk factors. This, coupled with the increase in CIMT seen in hypogonadal men and decrease in CIMT upon testosterone therapy, will likely add up to cause premature mortality.
Observational studies in populations of both healthy and diseased men demonstrate those with low or low-normal endogenous testosterone are at an increased risk of mortality compared to those with higher testosterone levels.[1] For example, multiple prospective studies have demonstrated a 24% to 96% (almost 2-fold) increased risk of mortality in apparently healthy middle-aged and older men who have low testosterone levels at baseline.[36-43] It is notable that cardiovascular disease accounts for most deaths in men with low testosterone levels.[1]
All this suggests that testosterone deficiency may be directly involved in processes that lead to the development of chronic diseases, as opposed to simply being a bystander (which some clinicians and academician state).
• Does testosterone replacement therapy slow down disease progression and ultimately increase survival and longevity?
Survival and longevity are the ultimate goals of interventions in medicine. As of this writing, two studies have been published that examined the effect of testosterone replacement therapy in men with hypogonadism on survival and longevity.[44, 45]
The first of these studies retrospectively analyzed 1031 male veterans greater than 40 years old who had attended clinics and found to have low testosterone ≤8.7 nmol/L (250 ng/dL).[44] They compared survival rates in men who had received testosterone therapy with those who had not and found that testosterone therapy significantly reduced mortality over a mean follow-up period of 40.5 months.[44] The mortality in testosterone-treated men was 10.3% compared with 20.7% in untreated men. After multivariable adjustment including age, body mass index (BMI), testosterone level, medical morbidity, diabetes and coronary heart disease, testosterone treatment was associated with a 39% decreased risk of death (HR = 0.61). In addition, this study showed no difference in the mortality rates from prostate cancer between testosterone-treated and testosterone-untreated groups.[44]
The second study examined the effect of testosterone therapy on all-cause mortality in hypogonadal type 2 diabetic men, and found significant survival benefits.[45] The majority of patients 60/64 (93.75%) received testosterone gel, 3/64 (4.68%) buccal testosterone and one (1.56%) intramuscular testosterone undecanoate. Testosterone therapy for a mean duration of 41.6 months was associated with a reduced mortality of 8.4%, compared to 19.2% in the untreated group. Testosterone replacement led to a realignment of survival prognosis with that expected in a testosterone replete man with type 2 diabetes. The multivariate-adjusted hazard ratio for decreased survival in the untreated group was 2.3, i.e. diabetic hypogonadal men who did not receive testosterone treatment had a 2.3-fold increased mortality risk. This study concluded that low testosterone levels predict an increase in all-cause mortality during long-term follow-up and that testosterone replacement therapy may improve survival in hypogonadal men with type 2 diabetes.[45]
These two remarkable studies in different populations show similar results of testosterone therapy on improving survival of hypogonadal men. While both of these studies where retrospective and thereby suffer the limitations of retrospective studies, the fact remains that a more than two-fold improvement in the chances of survival in both studies is very significant.

18.          Morgentaler, A. Letter to JAMA Asking for Retraction of Misleading Article on Testosterone Therapy. Availible at http://www.androgenstudygroup.org/initiatives/letter-to-jama-asking-for-retraction-of-misleading-article-on-testosterone-therapy, accessed July 2, 2014. 2014.