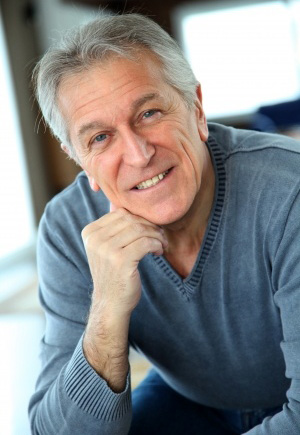 This study  expands previous research by prospectively examining the association between mortality and testosterone levels in men with type 2 diabetes, and evaluating the impact of concomitant statin or PDE5I use on testosterone treatment outcomes.[12]
857 men with type 2 diabetes, 58 to 65 years old, were screened from five primary care practices during 2007 to 2009. Of the 857 men, 175 of 637 men with total testosterone levels ≤ 12 nmol/L (346 ng/dL) or free testosterone ≤ 0.25 nmol/L received testosterone treatment with injectable testosterone undecanoate for a mean duration of 3.8 years. PDE5I and statins were prescribed to 175 of 857 and 662 of 857 men, respectively.
In 2014, after a mean follow-up of 4 years, demographic, concomitant treatment (statin and PDE5I) and mortality, major adverse cardiac events and prostate-related events data were collected from the most recent follow-up visit.
Adverse Events and Mortality risk
It was found that there were no differences in major adverse cardiac events and prostate-related events among groups.
Mortality risk was higher in men who were not on testosterone therapy or PDE5I. When analysis was adjusted for age at initial visit, men in the Normal T/untreated and Low T/treated groups had a 38% and 62% reduced risk of mortality, compared to the Low T/untreated group.
When additionally adjusting for PDE5I and statin use, the association between testosterone therapy and mortality lost significance, but the association of age at initial visit and baseline testosterone levels remained significant.
Among the 682 men not given a PDE5I, when compared to the Low T/untreated group, mortality in the Normal T/untreated and Low T/treated groups was significantly lower, 38% an 67% respectively.
Statin treatment was not significantly associated with mortality in any analyses. Blood pressure, BMI and lipids were also not significantly associated with mortality.
Among men with Low T who were not receiving testosterone therapy, use of PDE5I was associated with a 94% reduced mortality risk, and statin treatment appeared protective. In contrast, PDE5I treatment was not associated with mortality in the 175 patients on testosterone therapy.
Actual deaths
There were 103 deaths during the study period, primarily due to cardiovascular, respiratory and cancer causes. There were marked differences in mortality in the treated groups. Use of PDE5I reduced mortality rates to a greater degree in the Normal T and Low T/untreated groups, than in the Low T/treated group. Mortality rates were 19.74%, 13.31% and 3.64% in the Low T/untreated, Normal T and Low T/treated groups, respectively, as illustrated in figure 1.
Figure 1: Mortality Rates in Testosterone Treated vs. Untreated Hypogonadal men with Type 2 Diabetes. Data based on men not receiving PDE5I. 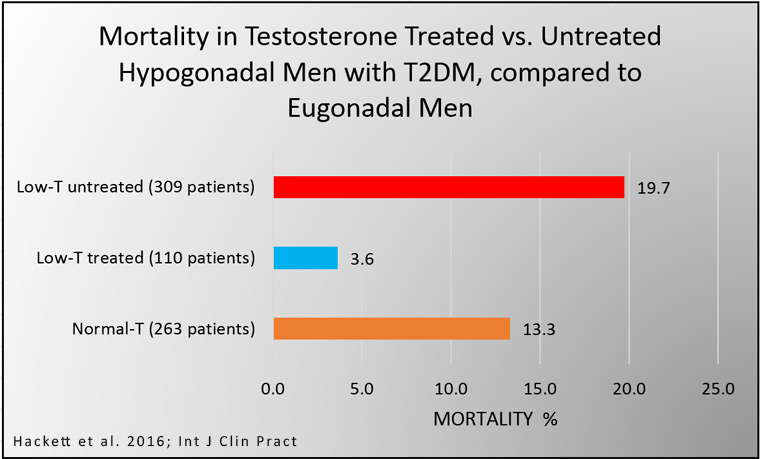