Testosterone in women - is it physiological and clinically important? 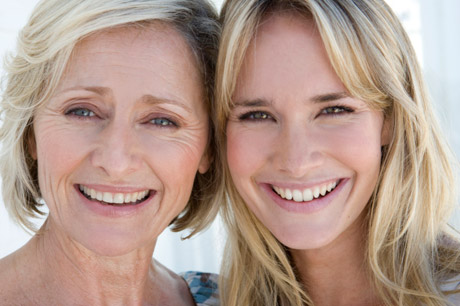 History behind common beliefs of testosterone in women

In the past, circulating testosterone in women was simply considered to be a by-product of ovarian estrogen production. Surprisingly, testosterone circulates in the blood stream in levels exceeding those of estradiol (the major estrogen) by 200-fold (see below), and it is thus the most abundant biologically active hormone in women. In fact, testosterone in measured in ng (nanogram) while estradiol is measured in pg (picogram) units (1 nanogram = 1000 picograms).
This simple fact refutes the old notion that testosterone is "foreign" or un-physiological in the female body. Despite this, a long-held belief is that androgen administration to women is "anti-physiologic".[1]
This myth primarily underpins the fear of the use of testosterone therapy for women today [2], and probably contributed to making estrogen the hormone of choice for "replacement therapy" in women.

In women testosterone is produced and secreted by the adrenals (25%) and the ovaries (25%), each approximately 50 mcg per day, with the remaining 50% being produced in peripheral cells from circulating DHEA and androstenedione.[3-6]
Total daily testosterone production rate in women is in the order of 0.1–0.8 mg [3, 7] while in men it is around 6.9 mg/d.[7] The table below shows reference ranges for testosterone in women, measured by mass spectrometry (the golden-standard hormone assay that has accuracy even at low steroid hormone levels).
Table 1:  Age-specific testosterone reference ranges in women.[8]
Compare these numbers with the reference ranges for estradiol (also measure by mass spectrometry): [9]
* Pre-menopausal women in follicular, mid-cycle, and luteal phases of cycle:
2.4 pg/mL, 3.1 pg/mL and 2.6 pg/mL respectively;
* Post menopausal women: 0.5 pg/mL
As the data shows, the highest estradiol reference number for a cycling woman is 3.1 pg/mL or 310 pg/dL or 0.31 ng/dL (note the differences in measurement units). As indicated in the table, testosterone reference ranges span from 8 to 63 ng/dL. Thus in women, natural testosterone levels are 25 to 200 times higher than estradiol! Tell this to anybody who claims that testosterone is un-physiological in women!
Contrary to estradiol, as the table shows, there is no sudden drop in testosterone levels in women with natural menopause.[10, 11] The largest decrease in testosterone levels in women occurs the early reproductive years, with no change across the menopausal years (ages 45–54).[10]  It should be noted that even after natural menopause, the postmenopausal ovary is hormonally active, contributing significantly to the circulating pool of testosterone.[12] This is in contrast to the abrupt 20-50% drop in testosterone levels in women who undergo surgical removal of both ovaries (bi-lateral oophorectomy, more on that below).[10, 13-16]
In premenopausal women testosterone is at its lowest concentrations in the early follicular phase of the cycle (after menstrual flow has ended) and rises to a mid-cycle peak.[17] As in men, women have a circadian fluctuation in sex hormone levels, with testosterone levels being highest in the morning around 8am.[18] In both pre- and postmenopausal women testosterone levels are significantly lower 3pm when compared to 8am. In premenopausal women, the same circadian fluctuation is seen for estradiol (the main estrogen).[18]
In regards to reference ranges, the fluctuations in testosterone levels during the menstrual cycle and during the day are relatively small compared with the overall inter-individual variability, so reference ranges can be applied in general irrespective of the day in the menstrual cycle the blood draw was taken and its timing.[19] However, it should be remembered that reference ranges are just a reference and not an indication of an optimal level for an individual for strive for (which displays a significantly inter-individual variability). Because of inter-individual differences in androgen receptor sensitivity (which is seen in both men and women), [20-27] changes in testosterone levels (both relative and absolute) over time are more informative in predicting outcomes than actual levels.[28] Therefore, is advisable to do regular blood draws at around the same clock time, so that deviations (increases or decreases) can be reliably monitored. This applies to both men and women.

Physiological importance of testosterone in women

Evidence that testosterone is of physiological importance in women and potentially plays important roles in multiple organ systems and female physiology comes from the fact that in human tissues (both male and females) there is a wide distribution of androgen receptors throughout the body. Studies have indentified significant androgen receptor expression in both male and female non-reproductive tissues, including the brain, skeletal muscle, breast, bone, kidney, thyroid, colon, lung and adrenal glands.[29-33] There is also significant expression of the androgen receptor in female reproductive tissues including endometrium, ovary, uterus, fallopian tube and myometrium.[29, 34-36]
Further indications that testosterone is important for women's health comes from studies showing that bilateral oophorectomy (surgical removal of both ovaries) is associated with higher risk of coronary heart disease, stroke, osteoporosis, Parkinson's, dementia, cognitive impairment, depression and anxiety, and overall mortality. [37-43] While it has been suggested that this is due to estrogen deficiency (when performed in young women), its long-term negative consequence on heart disease risk factors is not completely ameliorated by estrogen use.[44] The observation that women with oophorectomy are at greater risk for heart disease than intact women points to testosterone deficiency as a major contributing factor rather estradiol deficiency.[45]
Further evidence on the importance of testosterone in women comes from studies that have given women estrogen therapy after removal of the ovaries. One study found that pre-menopausal women who underwent oophorectomy experienced a significant worsening of vasomotor symptoms (hot flashes, night sweats and sweating) and a decline in sexual functioning (desire, pleasure, discomfort and habit).[46] The increase in vasomotor symptoms and the decline in sexual functioning were mitigated by post-surgery estrogen replacement therapy, but symptoms did not return to pre-surgical levels.[46] Another study in post-menopausal women also found that the negative effect of oophorectomy cannot be corrected by estrogen replacement therapy.[47] Thus, estrogen alone cannot make up for the consequences of the drop in testosterone that follows removal of the ovaries. Studies of both the consequences of oophorectomy and the effects of testosterone replacement are consistent with an important role for androgens in female sexual function, well-being and health.[48] In an upcoming article I will cover other causes of testosterone deficiency in women.

History of testosterone therapy in women

Few people know that testosterone therapy was reported to effectively treat symptoms of the menopause as early as 1937.[49] In 1938 studies demonstrated that testosterone therapy effectively treats various gynecological and sexual disorders.[50, 51] The actions of testosterone propionate on the uterus and breast was actually reported in the first volume of the highly acclaimed medical journal The Lancet in 1938.[51]
1941 the beneficial effects of testosterone in ameliorating various gynecological disorders in women were further documented in a study of women in different gynecological groups.[52] It was found that testosterone therapy effectively alleviates dysmenorrhea, after-pains, premenstrual tension and breast pain, dysfunctional uterine bleeding, and menopausal symptoms.[52] Interestingly, the study author states "The use of androgenic hormones for the relief of varied functional gynecologic disorders has now been thoroughly accepted."[52] That same year it was shown that androgens are synthesized in the female and are the precursors of estrogen biosynthesis.[53]
1943 it was suggested that testosterone nullify or modify the action of estrogens, suppress or decrease the production of estrogens by the ovary and inhibit proliferation in the endometrium.[54] It was further reported that testosterone is effective in treating premenstrual tension and breast pain, dysmenorrhea (pain during menstruation that interferes with daily activities), postpartum engorgement of the breasts (painful overfilling of the breasts with milk), menometrorrhagia (prolonged or excessive uterine bleeding that occurs irregularly and more frequently than normal), and certain types of the menopause syndrome.[54]
Several studies published in the 1940s confirmed that testosterone increases women’s sexual libido.[54-56] One of these studies specifically reported the following general effects:[55]
(a) Enlargement of the clitoris. No patient found this to be unpleasant.
(b) Increased sexual drive even in older women. The fact that this can be found without a single exception, even when the male hormone is given by injections in sufficient amounts, shows that testosterone can be designated as an "infallible aphrodisiac".
c) All testosterone treated women acknowledge a great feeling of wellbeing, more balanced moods, and clearer thinking; and some profess also a greater determination.
In regards to the psychological effects, the study author amusingly reported "...we might therefore speak of a "chemistry of the emotions" in order to express that the temperament is influenced by the chemical substance so long as the hormone is active. It would be interesting to go further into this side of hormone therapy, and to study how the feelings might be chemically controlled. Some of Freud's theses would perhaps have to be modified."[55] Later is was confirmed that physiological doses of testosterone may be used to advantage in the management of the menopause, sexual dysfunction and breast disease.[1] Thus, the myth that "there is no research or clinical experience supporting the use of testosterone therapy in women" is clearly false. In upcoming articles I will report on more recent studies on testosterone therapy in women of all ages.

Contrary to common belief, testosterone levels in women are naturally higher than estradiol by some 200-fold, and are thus not un-physiological for women. The ovaries in women of all ages are a significant source of testosterone. Even the postmenopausal ovary is an ongoing site of testosterone production, although the production of estradiol ceases.
Little known, testosterone therapy has been clinically used since the 1940s to treat menstrual problems, sexual dysfunction, and menopausal symptoms. Studies on women who have had their ovaries surgically removed further clearly show the importance of testosterone for women's health and wellbeing.
In upcoming articles I will report and comment on recent studies of testosterone therapy in women of all ages, and its beneficial as well as potential side-effects. Stay tuned!
References:

6.            Labrie, F., et al., Physiological changes in dehydroepiandrosterone are not reflected by serum levels of active androgens and estrogens but of their metabolites: intracrinology. J Clin Endocrinol Metab, 1997. 82(8): p. 2403-9.