Niacin, aka vitamin B3 – what you need to know about potential side effects 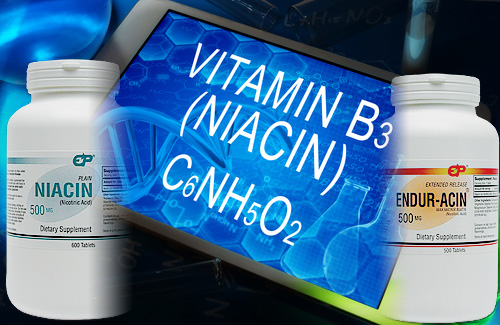 In previous articles I have talked about the multiple beneficial effects of niacin supplementation – on both lipids (blood fats and cholesterol) and non-lipid outcomes.
While flushing is often reported to be the main side-effect of niacin supplementation, the flush is a natural reaction to high-dose niacin, and is not dangerous. Thus, while some people may find it uncomfortable, it is not a harmful side-effect. For more on that, see “Niacin - How to Beat the Flush”
Other, potentially harmful side effects, are liver strain/damage, insulin resistance and blood glucose elevations, and uric acid elevations.[1] Here I will summarize what research shows on the severity of these side effects, and whether it is something you should worry about…

Niacin supplementation (all forms) may cause a modest, transient, and reversible elevation of fasting blood glucose levels, and in some people also an increase in glycosylated hemoglobin (HbA1c) levels (an indicator of average long-term blood glucose levels).[24] This increase in fasting blood glucose levels and HbA1c is greater in diabetics than non-diabetics.[25, 26]
In the Arterial Disease Multiple Intervention Trial (ADMIT), 468 patients with peripheral arterial disease, including 125 with type 2 diabetes, were randomized to immediate-release niacin (up to 3000 mg/day or maximum tolerated dose) or placebo for 60 weeks.[25] A transient increase of fasting blood glucose levels was found as the niacin dose was up-titrated to 3000 mg, but the elevations returned to baseline levels six weeks after the niacin dosage was stabilized.[25]
In the assessment of diabetes control and evaluation of the efficacy of niaspan trial (ADVENT), 148 patients were randomized to receive extended-release niacin (Niaspan) 1500 mg/day or placebo for 16 weeks.[26] Fasting glucose levels of one third of diabetic patients receiving either 1000 or 1500 mg of Niaspan daily increased between weeks 4 and 8, but returned to baseline by week 16. The 1000 mg/day dose resulted in no significant alteration in glycemic control compared to placebo. The 1500 mg/day dose resulted in modest deterioration of glycemic profile, as indicated by an elevation in HbA1c from 7.21% to7.50%.[26] However, it was stated that any increased risk of microvascular diabetic complications due to this 0.29%-age point increase in HbA1c would likely be offset by the decreased risk of cardiovascular disease thanks to the significant improvements in blood cholesterol and lipoprotein profile.[26] A comprehensive review of the safety aspects of niacin supplementation also concluded that the benefits of niacin far exceed the small deterioration in glucose control.[27]
It was concluded in both ADMIT and ADVENT that lipid-improving dosages of niacin can be safely used in patients with diabetes.[25, 26] In people with diabetes and metabolic syndrome, who are characterized by low HDL levels, the use of a low, more tolerable dose (about 1000 mg/day) can be expected to boost HDL levels by 25%.[11, 28] This is important to underscore as the lipid abnormalities encountered in these patients (low HDL levels and dysfunctional HDL, together with elevated triglycerides and small atherogenic LDL particles) are ideally suited to niacin treatment.
This position is supported by the impressive results from the coronary drug project, where supplementation with immediate-release niacin for 4 years increased fasting blood glucose levels by 7 mg/dL [29] but reduced the risk of 6-year recurrent heart attacks, as well as heart disease death and 15-year total mortality, compared with placebo.[30] These effects were independent of the small elevation in fasting blood glucose.[30] Niacin supplementation in patients with metabolic syndrome conferred the same health benefits (despite a 5.5% increase in fasting blood glucose levels).[31]
Thus, there is good evidence showing that the small increase in fasting blood glucose levels does not negate the overall clinical benefits of niacin supplementation, which is seen even in patients with the metabolic syndrome or diabetes.

As with most things in life, there is a risk-to-benefit ratio. When it comes to niacin, for the large majority of people, the benefits far outweigh any potential side effects.
Despite concerns of liver strain/damage, insulin resistance and uric acid elevations, data shows that therapeutic doses of niacin are safe, even in people with the metabolic syndrome or diabetes.
When considering potential side effects of niacin it should be underscored that according to the US Food and Drug Administration's (FDA) Adverse Event Reporting System, which evaluates the safety of niacin as it is used in daily life, the safety profile of niacin compares favorably with other commonly used cholesterol drugs, including statins and fibrates.[37] The adverse liver effects with prescription extended-release niacin (Niaspan) up to 3000 mg per day are minor, and occur at rates similar to those reported for statin treatment.[38]
If you are looking for an over-the-counter time-release niacin product, get the wax-matrix formulation (Enduracin). The wax-matrix form of time-release niacin has the most research backing up its safety and efficacy in doses around 1500 mg per day. With immediate-release niacin, higher doses of 3000 to 4000 mg per day are safe in most people.
The important thing to remember with niacin is to “start low and go slow” – i.e. to gradually build up the dose - and let your body develop tolerance to the flush. For practical recommendations, see my previous article
“Niacin - How to Beat the Flush”
References: