Fish Oil for Fat Loss - can it really help you get in shape? 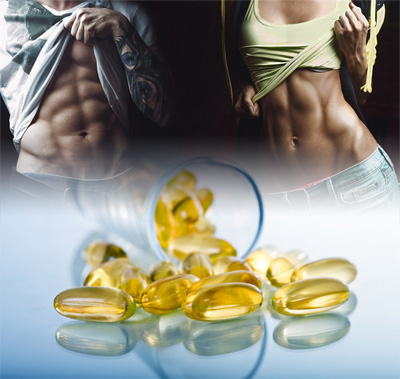 Fish oil is most known for its beneficial heart and cardiovascular effects, and continues to top the list of health promoting supplements. Fish oil is unique in its ability to protect against heart disease and promote cardiovascular health in all people, regardless of age or baseline health status [1, 2].
Fish oil improves the blood lipid profile and is especially effective at lowering triglycerides (a.k.a. blood fats).[3] It also has beneficial effects on blood platelet activity, blood thickness, as well as blood vessel (endothelial) function [4-11], blood vessel elasticity [12], and blood pressure [13, 14], among other things.
In 2004 FDA approved a prescription fish oil preparation for treatment of high triglycerides (hypertriglyceridemia) [3, 15, 16]. Accumulating research shows that fish oil also has other beneficial effects, which are more visually notable… notably, fat loss!

In the 80s early 90s, several animal studies showed that fish oil markedly reduces body fat [17-20] and weight gain [21-24], and limits adipose tissue growth [25-27]. These effects have been seen during both a decreased [18, 22], constant [20] and even increased energy intakes [21]. This indicates that the fatty acids in fish oil - EPA (eicosapentaenoic acid) and DHA (docosahexaenoic acid) - have an effect on the partitioning of fat between fat burning and storage in the body.

Does it work in humans - what’s in it for me?

At this point you might be thinking “ok, that sounds all nice, but I’m not a rat... does it work in humans”?  Read on…

Fish oil as part of a non-dieting habitual lifestyle

Several studies have shown that fish oil also can help people get in shape. In a landmark study of healthy young non-obese males, 6 g of fat from butter, olive oil, sunflower oil and peanut oil was replaced with 6 g fish oil (providing 1,100 mg EPA and 700 mg DHA) per day [28]. After 3 weeks the researchers noted a significantly increased resting fat burning (fat oxidation) and a 1.94 lb (0.88 kg) decrease in body fat (measured by the golden standard method DEXA). There was no change in body weight. This fat loss was seen despite instructions for the subjects to not change their usual exercise and food habits.
Another study, also against a background of constant food and exercise routines, gave obese type 2 diabetic female subjects 1,080 mg EPA and 720 mg DHA for 2 months, or placebo paraffin oil [29]. Even though there was no change in body weight, the fish oil group demonstrated a significant reduction in fat mass by 3.6 lb (1,614 kg). This fat mass reduction was mainly due to a decrease in belly (trunk) fat. In addition, the fish oil group experienced a reduction in fat cell size by 6.3% [29].
It has also been found that supplementing with fish oil for 3 weeks (1,100 g EPA and 700 g DHA daily) significantly decreases insulin levels and increases fat burning after consumption of carbohydrate rich meals [30]. Supplementation with a higher fish oil dose - providing 2,400 mg EPA and 1,600 mg DHA - for 3 weeks also boosts fat burning during jogging exercise [31].

Fish oil seems to be even more effective when combined with exercise. In obese men and women, the effects of the addition of 6 g of fish oil daily (providing 360 mg EPA and 1,560 mg DHA) in combination with regular aerobic activity (walking 45 min three times per week at an intensity of 75% of age-predicted maximal heart rate) for 12 weeks, was investigated [32]. The results showed that the combination of fish oil and regular aerobic activity not only improved several risk factors for cardiovascular disease, but also significantly reduced body fat mass with 4.4 lb (2 kg) [32]. The finding that body weight and body fat percentage didn't change in the placebo group (which was put on the same exercise program but received 6 g sunflower oil instead of the fish oil) underscores the efficacy of fish oil for fat loss.
It is interesting that the fat loss seen in the fish oil - exercise group occurred even though the subjects did not change their usual food habits; they just added the fish oil supplement and exercise program to their lifestyle. In this study, no fat loss was seen in fish oil only group (which didn’t exercise). This is probably due to the very low dose of EPA. Most studies showing that fish oil increases fat loss have use fish oil products that provide 1.5-2 times more EPA than DHA.

Fish oil supplementation can boost the effect of calorie restricted diets as well. This was found in a study that investigated the effect of including fish oil as part of an energy-restricted diet, on weight loss [33]. Young obese adults were put on a calorie restricted diet (30 % less calories than their usual intake, approximately a daily 600 calorie deficit) that was supplemented with 6 g fish oil providing 1,500 mg EPA + DHA, or placebo (sunflower oil capsules). It was found that the fish oil enriched diet resulted in 2.2 lb (1 kg) more weight loss and greater reductions in waist circumference after only 4 weeks, than the same diet without fish oil [33].

Fish oil combined with a calorie restricted diet and exercise

A study that tested the effect of adding 2,800 mg/day fish oil (EPA:DHA ratio 2:1) to a low-calorie diet combined with an exercise program, in severely obese women [34]. After only 3 weeks the fish oil group lost 3.3 lb (1.5 kg) more weight and slashed almost 1 inch (2.3 cm) more fat from their hips, than the non-supplemented group.
While body fat changes were not reported, the researchers did find a greater increase in blood beta-hydroxybutyrate (a ketone body) in the fish oil supplemented group compared with control group, and interpreted this as providing evidence of greater fat breakdown and utilization in the fish oil group [34]. These findings indicate that the addition of fish oil to a relatively short (3 week) weight loss program consisting of low-calorie diet and exercise, may increase fat burning and lead to greater improvement in body composition.

In contrast to the positive studies, there are a few that didn’t show any fat loss with fish oil supplementation [35-38]. This could be due to differences in subject characteristics (age, initial body fat mass, baseline physical activity), methodological differences, and differences in fish oil preparations. As outlined above, several high quality studies have shown that fish oil supplementation has a significant fat loss effect, in addition to all its other health promoting effects. The majority of evidence thus supports fish oil's ability to shift fat metabolism away from storage towards burning of stored body fat.

While fat loss alone will improve body composition, when combined with muscle gain the body composition improvement will be even greater. Muscle and body composition is critical not only for physical performance and physical appearance, but also for health promotion.
One study gave healthy men and women (mean age 33 years), who were told to maintain their current food and exercise practices, 4 g fish oil providing 1,600 mg EPA and 800 mg DHA [39]. After 6 weeks, the placebo group, which was given 4 g of safflower oil, showed a tendency towards fat gain. In contrast, the fish oil group experienced a significant reduction in fat mass of 1.1 lb (0.5 kg) and increase in fat-free mass of 1.1 lb (0.5 kg), with no change in body weight.
A 1.1 lb reduction in fat mass combined with a 1.1 lb increase in fat-free mass, without changes in subjects’ typical food and exercise habits is pretty remarkable body composition improvement. It also underscores the importance of investigating fat mass and lean mass separately, since just measuring body weight will not tell anything about potential body composition improvements.
For more into on the effect of fish oil on muscle growth, see my previous article:
“Fish Oil for Muscle Growth and Prevention of Muscle Loss with Aging”
If you think muscles are only for athletes and bodybuilders, you must read this:

“Muscles – not just for bodybuilders!”

Mechanism – how does it work?

In search for the mechanisms explaining how fish oil results in fat loss, it has been found that fish oil exerts favorable metabolic effects by modulating gene expression (which is the process by which the information encoded in a gene is converted into protein)[17, 40-53]. While we inherit our genes (a.k.a. blueprints) from our parents, what determines the way in which our blueprints are interpreted is largely dictated by a collection of environmental factors. The nutrients we consume are among the most influential of these environmental factors [54, 55]. One dietary constituent that has a strong influence on our genetic makeup is dietary fat [17, 40, 41, 43-46, 48-50, 52, 56]. Fatty acids from dietary fat not only influence hormonal signaling, but also have a very strong direct influence on the molecular events that govern gene expression.
More specifically, it has been shown that the fatty acids EPA and DHA from fish oil (by affecting gene expression) inhibit the activities of fat synthesizing (lipogenic) enzymes [57-64], while at the same time stimulating the activities of key enzymes that govern fat burning [17, 65-73].
Fish oil also has been shown to increase levels of adiponectin and decrease levels of cortisol [39, 74]. Adiponectin is an protein (produced by fat cells) that circulates in the blood [75]. It has many beneficial health effects, including improvement in insulin sensitivity and lowering of blood sugar (plasma glucose) and triglyceride levels [75, 76]. A reduction in adiponectin is associated with insulin resistance [75], and adiponectin levels are inversely related to the degree of adiposity (i.e. people with more body fat have lower levels of adiponectin) [76]. Adiponectin is also associated with steroid and thyroid hormones, cortisol (glucocorticoids) and nitric oxide, and it has anti-atherogenic and anti-inflammatory properties [76]. Thus, it is plausible that fish oil induces some of its effect by boosting adiponectin levels.
Thus it is likely that adiponectin may become a target for therapeutic interventions in the future.
It is also interesting that fish oil lowers cortisol. While the exact role of cortisol in obesity isn’t fully elucidated [77, 78], it is known that excessive cortisol levels may cause substantial fat mass gain [79, 80]. Thus, the reduction in cortisol levels after fish oil supplementation could contribute at least partly to the fat loss observed with fish oil supplementation.

To maximize the fat loss and muscle growth effect of fish oil, aim for a daily fish oil dose that provides you with at least 1,900 mg (1.9 g) EPA and 1,500 mg (1.5 g) DHA. Ideally, strive to get at minimum about 4000 mg (4 g) EPA + DHA combined. As of this writing, there is not enough research data to make precise recommendations on any specific EPA-to-DHA ratio for fat loss.

Check out my related articles:
Fish Oil for Muscle Growth and Prevention of Muscle Loss with Aging
Muscles – not just for bodybuilders!
References: