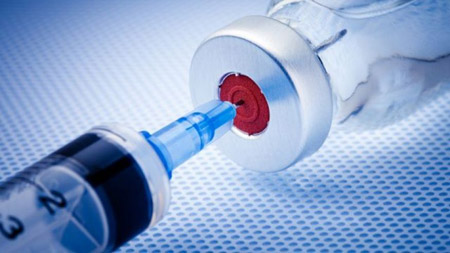 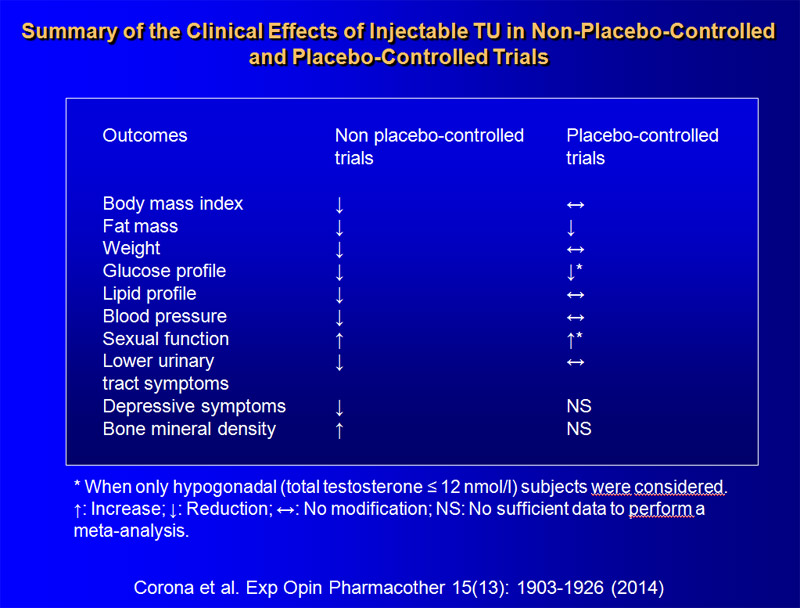 In contrast to shorter-acting injectable testosterone formulations, like for example testosterone enanthate, cypionate and propionate, testosterone undecanoate only need to be injected at 10 to 14 week intervals, after initial loading dose. 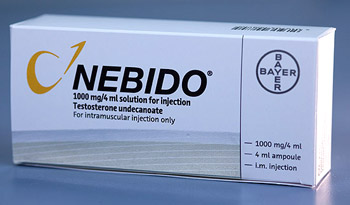 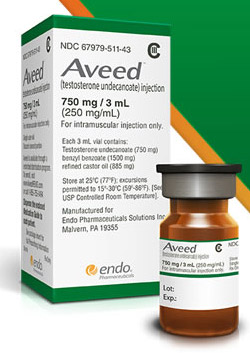 The large IPASS study (International Post-Authorization Surveillance Study) on the tolerability and effectiveness of injectable testosterone undecanoate for the treatment of male hypogonadism according to these recommendations, was conducted in a worldwide sample of 1,438 hypogonadal men.[5] Patients received up to 5 testosterone undecanoate injections during 9-12 months; a total of 6333 injections were analyzed. Mean testosterone levels rose from a baseline of 9.6 nmol/L to 15.2, 16, 17 and 17.3 nmol/L, at second, third, fourth and fifth injections, respectively.[5] Mean trough serum total testosterone increased from 9.6 nmol/L at baseline to 17.3 nmol/L before the fifth injection (p<0.0001). At the time of injection 5, there was a significant improvement in the overall levels of sexual desire/libido compared with baseline. Significant improvements over each injection interval were seen in the overall levels of vigor/vitality, mood and ability to concentrate (p<0.0001 for each). The proportion of patients reporting moderate, severe or extremely severe ED was significantly decreased from baseline at the time of the fifth TU injection, from 65% to 19% (p<0.0001). Mean waist circumference decreased from 100 to 96 cm, and serum triglyceride, total cholesterol, LDL cholesterol and blood pressure was significantly improved from baseline at injection 5.[5]
The pharmacokinetics of Aveed (750 mg/3 ml) were investigated in a multicenter, US study on 130 hypogonadal men (total testosterone  < 10.4 nmol/L) followed up to 24 weeks.[6] Injections were administered at baseline and week 4, and thereafter every 10 weeks. A steady state was obtained after the third injection. About 94% of all men had a mean testosterone level ranging within the normal range (10.4 - 34.7 nmol/l) during the 10 weeks after the third injection, and 92% of the subjects had a maximum testosterone concentration (Cmax) of < 1500 ng/dl (52 nmol/l), meeting threshold criteria requested by the FDA.[6]

This comprehensive meta-analysis of 33 intervention studies unequivocally confirms that treatment of hypogonadism with injectable testosterone undecanoate confers multiple beneficial effects.
Body composition
Injectable testosterone undecanoate treatment was found to result in a significant reduction of BMI (mean close to 1 kg/m2). The reduction in BMI was significantly lower in older patients and was increased as a function of trial duration and/or BMI at baseline. Thus, maximal effect is obtained in younger, more obese subjects, and in subjects treated for a longer time. The impact of treatment duration on outcomes (in this case BMI, see figure 2) confirms previous findings that longer-term treatment may be necessary in most patients for full expression on benefits.[7] 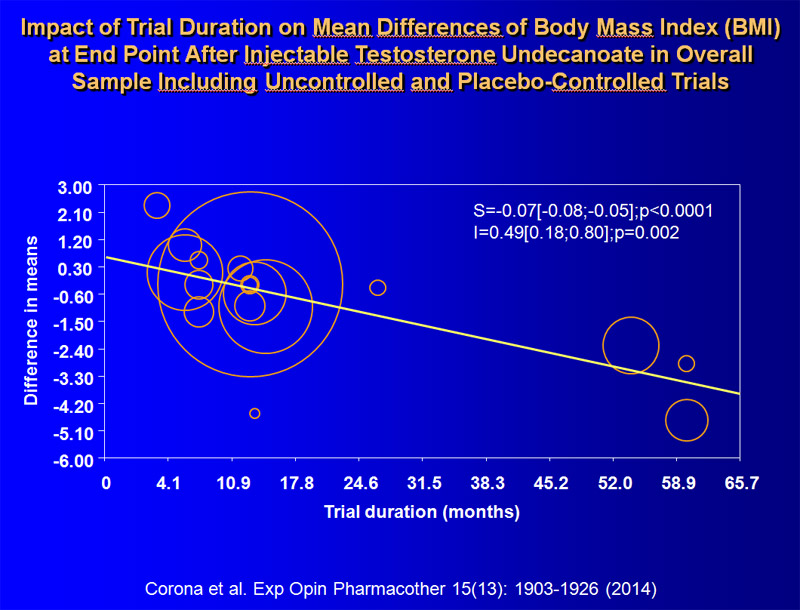 Figure 2: Influence of study duration on reduction in BMI after injectable testosterone undecanoate therapy in overall sample including uncontrolled and placebo-controlled trials.
The positive effect of injectable testosterone undecanoate on BMI reduction was confirmed in a multivariate analysis, after adjusting for age, BMI at baseline and trial duration. However, when the analysis was stratified according to baseline population characteristics, the data were confirmed in those trials enrolling only hypogonadal subjects (total testosterone level ≤ 12 nmol/L), but not in those enrolling a mixed eugonadal/hypogonadal cohort.
In line with the reduction in BMI, there was a significant reduction of total weight (mean weight loss: 5.88 kg, range 2.64-9.11 kg) and waist circumference (mean waist loss:  -7.11 cm, range -4.64 to -9.59 cm). These reductions in weight and waist were confirmed after the adjustment for the aforementioned confounders and the change in BMI.
In addition, treatment was found to result in a significant reduction in fat mass, with a mean fat loss of -4.56% (range 3.36% to -5.76%).
Glycemic / metabolic profile and blood pressure
Injectable testosterone undecanoate treatment resulted in a significant reduction of fasting glucose (mean -0.51 mmol/L, range -0.27 to 0.75) and HbA1c levels (mean -0.68%, range -0.32% to -1.04%), as well as improvement of insulin resistance (measured by HOMA index).
Treatment also improved the lipid profile by reducing total cholesterol (mean -0.89 mmol/L, range -0.60 to -1.19 mmol/L) and triglyceride levels (mean -0.44 mmol/L, range -0.24 to -0.63 mmol/L), and increasing high-density lipoprotein (HDL) cholesterol levels (mean +0.15 mmol/L, range +0.08 to +0.23 mmol/L).
Improvement was also seen in blood pressure, with mean reductions in systolic and diastolic blood pressure of 10 mmHg and 7 mmHg, respectively.
Sexual function
A significant improvement of erectile function was found after treatment with injectable testosterone undecanoate. This finding was especially notable in studies of clearly hypogonadal men with total testosterone level ≤ 12 nmol/L, and confirms previous research showing that sexual symptoms are among the main manifestations of full-blown testosterone deficiency.[8, 9]
International Prostate Symptom Score (IPSS)
Treatment was also found to result in a significant reduction of the International Prostate Symptom Score (IPSS). As for sexual function, this finding was especially notable in studies of clearly hypogonadal men with total testosterone level ≤ 12 nmol/L.
Bone mineral density
A significantly increased lumbar bone mineral density was also found.
Depression
Depressive symptoms significantly improved after treatment.
Safety parameters
When looking at occurrence of side effects, it is important to know the total sample size to get a perspective. In this meta-analysis, the included studies together had 3359 men in the treatment group and 478 patients on placebo.
An elevated hematocrit above the physiological level was reported in 4 subjects enrolled in non-placebo controlled studies and by some subjects in placebo-controlled RCT (event rate 0.02 %).
Non-placebo controlled studies did not report any major adverse cardiovascular event (MACE), whereas 8 MACEs were observed in placebo-controlled RCTs (3 in the treatment groups and 5 in placebo groups).
Among placebo-controlled RCTs, prostate specific antigen (PSA) levels > 4 ng/ml were reported in 7 cases (5 in treatment groups and 2 in placebo groups, however between-group difference being non-significant at p = 0.26), whereas 11 subjects experienced PSA > 4 ng/ml in non-placebo controlled trials (event rate 0.04%). 11 subjects in non-placebo controlled trials had a new diagnosis of prostate cancer during follow up (event rate 0.03%). However, prostate cancer was not reported in any of the placebo-controlled RCTs.

This meta-analysis clearly demonstrates multiple beneficial effects of testosterone undecanoate treatment in hypogonadal men [2], consistent with conclusions from a previous review.[1] It also raises some important aspects of testosterone treatment.
Firstly, many of the important effects of testosterone therapy reach statistical significance only after longer treatment durations. Because long-term studies are almost impossible to do in a placebo-controlled fashion, it comes as no surprise that statistical significance was reached exclusively in uncontrolled studies for several outcomes; waist circumference, body weight, lipid profile and blood pressure. This underscores the importance of treatment duration and adherence for achievement of maximal results, which was described in a previous analysis by Saad et al. "Onset of effects of testosterone treatment and time span until maximum effects are achieved".[7] As an accumulating body of evidence shows, hypogonadism is a condition which cannot simply be left untreated.[10-17] Therefore, it would be unethical to conduct long-term placebo-controlled studies.
Secondly, while testosterone therapy improves glycemic control and insulin resistance in subjects with the metabolic syndrome and type 2 diabetes [18-24] this meta-analysis shows that testosterone undecanoate treatment also may improve glucose profile even in hypogonadal populations without overt diabetes. This supports the hypothesis that testosterone might be causally involved in the pathogenesis of the metabolic syndrome and type 2 diabetes. Further support for this comes from prospective studies demonstrating that a low testosterone level at baseline predicts the development of both the metabolic syndrome and type 2 diabetes at follow up.[7, 15, 19, 20]
Regarding safety aspects, 11 new cases of prostate cancer were found among a total of 3359 (11/3359=0.0032) men who were treated with testosterone undecanoate.[2] This is similar to the incidence rate for prostate cancer in the general population for men aged 50-59, which has been reported to be 221 per 100,000 men (221/100,000 =0.0022).[25]
The results of the present meta-analysis found no increased risk of MACEs. There were actually more MACEs in placebo groups compared with treatment groups, 5 and 3 respectively. This is in line with results from another recent meta-analysis that specifically investigated cardiovascular risk associated with testosterone boosting medications, which did not observe any increase in MACE risk associated with testosterone treatment, either when composite or single cardiovascular end points were considered.[26]
The lack of a significantly increased risk of prostate-related disease (cancer or PSA > 4 ng/ml) in this meta-analysis confirms the findings from another recent meta-analysis which specifically evaluated the relationship between TRT and prostate cancer.[27] For more information on testosterone and prostate health, see our previous editorial "Testosterone and Prostate Cancer - a paradigm shift" (insert link).
Major advantages of testosterone undecanoate over shorter-acting formulations like testosterone enanthate are its lower frequency of administration and its better tolerability and safety profile.[28, 29] A side effect that is relatively common with older short-acting injectable preparations, erythrocytosis, is rare with injectable testosterone undecanoate and not statistically different from placebo in RCTs.[2]
Hypogonadism is a chronic condition that often requires chronic, if not lifelong, treatment. Long-lasting testosterone undecanoate therapy, with only 4-5 injections per year (instead of up to 24) offers a practical administration schedule. Patient preference for the convenient dosing schedule can be expected to lead to better compliance and thus greater therapeutic benefit. This is an important aspect, as compliance to other testosterone formulations has been reported to be poor.[30] More importantly, testosterone undecanoate does not result in supraphysiological spikes in testosterone levels as is seen with short-acting testosterone formulations. This explains why patients treated with injectable testosterone undecanoate report less mood swings and less fluctuations in energy levels and sexual desire, than patients treated with older short-acting preparations.[2]
The take home message from this comprehensive meta-analysis is that injectable testosterone undecanoate offers a patient-friendly, effective and safe treatment option for hypogonadism. Thanks to its favorable pharmacokinetic and safety profile, testosterone undecanoate especially suitable for chronic testosterone treatment, and thereby achievement of maximal benefits.
References: